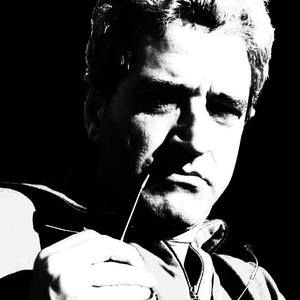 Juan Aguirre Vila-Coro (Madrid 1955), is an architect and has reconciled this profession with other activities in the field of Plastic Arts, first as a painter with traditional techniques (oil, acrylic and airbrushing) and then dedicated mainly to digital modeling.
Digital art still has a way to go to be recognized by all the artistic community first, and by the citizenship afterwards (or the order is to the reverse?). The fact that the digital artist does not hold a brush in his hand yet arouses suspicion and suspicion. "That's not art," some say.

The conservatism It has always been associated with the reception of the artistic work. Evil that weighs us, we continue with the mind in the eighteenth century under the dictatorship of the Fine Arts

There is a clear agreement between current hyperrealism, as an artistic orientation, and digital art, as technical modeling. The digital solution seems even more subtle to me when the artist has a long background and architectural experience. This is the case of Juan Aguirre, an eloquent example of computational hyperrealism.

Critic
I would say that the conception of space is one of the most interesting aspects of his artistic universe. Using the technique of «mise en abyme», where the interior extends to infinity. The specular space is presented as a huge gallery (in several paintings, from Café at sunset, 2012, to El cambio de luces, 2018) or as urban landscapes. The most explicit picture for this technique is The disturbing invisible camera, 2018.

"For specular reflections, we must invoke the glass (its favorite material) and the surfaces that can function as a mirror. Glass is also present in showcases and everyday objects such as bottles, glasses etc. Its translucency fascinates the artist who imagines not only huge rooms, but also large transparent sculptures in open decorative spaces.

Chromatics seems to be, in its deepest option, a lesson in Piet Mondrian's abstractionism. The artist uses three primaries: blue, red, yellow, and two non-colors: black and white. Mondrian is present with two paintings (fake, of course) in the famous Juan Aguirre gallery (Reflejos pastel con dama, 2018), but also in Sinestesia, 2016, and, more discreetly, in Bufet, 2012, for example. I would also like to leave a note on the secondary chromatic whose inspiration comes from the Rubik's cube (where orange and green appear), which has become a symbol in today's hyperrealism, since it allows the intersection of the squares of "artificial" colors , with the positional random.
There are older objects, some present in cubist paintings or those of Pop art (newspapers, cigars, coffee cups, telephones), and objects of modern design (pencils, lego bricks, chairs, etc.) present in domestic interiors. On the street, among the most present are bicycles, as well as everyday vehicles. Weaker at the beginning and less significant, Juan Aguirre's bicycles are personalized from 2015, when his chromaticism adopts the elementary colors and when the sequences of the wheels and chains begin to awaken the fascination for the prolixity of straight lines and intricate curves (Vicious circles and other following).

In all paintings there is a strong formal, material and chromatic coherence. Let's stay for a while on The pencils of Fukushima, 2013. There are several references for this painting: the mirror, the symmetries, the almost fluorescent effect of the tips, the Mikado game («chopsticks»), the nuclear accident, straight lines and circles ... .

Juan Aguirre is very meticulous like all the hyper-realists who, paradoxically, hide a good part of the meaning of their works that, in another way, seem to be "evident" in the eyes of the general public."

DIRECTOR OF THE ARTISTIC DEPARTMENT OF THE SUPERIOR SCHOOL OF VIDDRO.

Organization and monitoring of the rest of the subjects of the Artistic Area: Artistic Drawing, Analysis of Forms: Color, Technical Drawing.

Representative of the Artistic Area in the Access Tests

Representative and Tutor of the Projects End of Career Artistic Area.

He exhibits his work mainly in Virtual Galleries as, Artelista, Virtualgallery, Elmuseovirtual, Artforgallery, etc ... and in his own website: www.aguirre-arte-digital.es. He has won several awards, being the last of them in the year 2008 when he won the third prize in the International Design Contest of the Wine Decanter "Custodio".

Digital art still has a way to go to be recognized by all the artistic community first, and by the citizenship afterwards (or the order is to the reverse?). The fact that the digital artist does not hold a brush in his hand yet arouses suspicion and suspicion. "That's not art," some say. The conservatism It has always been associated with the reception of the artistic work. Evil that weighs us, we continue with the mind in the eighteenth century under the dictatorship of the Fine Arts.

- Collective exhibition "The plastic work of the Architects" Official College of Architects of Segovia, year 2.013. Graphic representation of Virtual Models.

- College of Architects of Segovia Year 2.015. Collective exhibition with, Juan Carlos Gargiulo with Photographs and the sculptors Miguel González and Luciano González.

He has held exhibitions of his plastic work mainly in Madrid, Segovia and La Granja de San Ildefonso, which is where he has lived and worked for some twenty-five years as an architect and, for sixteen years, as a teacher of various subjects in the field of Plastic Arts , first in the School of Architecture of the SEK University of Segovia and, later, in the National Glass Center Foundation, with some incursion in Art Fairs in Europe (Cremona, Italy 2.013 and Brussels, Exhibition Spain-Select 2.014) The months of May and June of 2017 exhibit most recent works in the Caffé del Arte in Madrid.