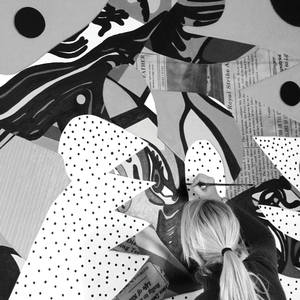 Born,1984 / Istanbul, Turkey
Oskay in her early periods interpreted the works of great masters of modern art while she was examining the popular culture .In the wide range of the artists such as Mondrian , Matisse and Picasso,she has interpreted and appropriated the works of them and brought forward popular art with her original point of view. Along with interpretation of popular works of art,in her progressive period ,she produced a series of works on the problematic how popular images create awareness in current life and how these are transformed into art works in one to one interaction .
In the following periods;
Artist who effected Picasso's saying " Every act of creation is first act of destruction" , now also under the influence of his own art and under the inevitable nature of artistic change. She has entered into the process of cutting , destroying and reconstructing of her old paintings with a method in which the results can not be foreseen. This change in her paintings is based on the uncontrolled union of controlled creation .
Artist started to cut off her works of figurative abstraction series and divide them into squares in order to create new compositions .According to Oskay; ‘It is necessary to destroy to create, the process of destroying is painful as much as chronic.But if there is a point you are thinking of reaching, destroying is a step, at the same time ...’ Oskay, in this process of destruction, after receiving incidental close frames, arrives to abstract art from figurative abstraction. In Oskay's paintings, abstract becomes part of the abstraction.
Effect, reaction and change in art are inevitable. These effects, reactions and changes are most important requirements for moving the art forward. According to Oskay; prediction of the future art is possible by identifying the coordinates and intersections of the artists who directed the art and specifying a new route through these paths.
The artist's last period (multi-layered) works; Derived from the sense of destruction, purity, and absence, she used absence as a theme in her new works as a trace of this simplicity. The artist states to create large gaps in his paintings and the shadows that filter between these gaps are shadows of absence. According to the artist, non-existence refers to the existing. The created spaces allow to think and interpret, allowing the viewer to complete the space as perceived.