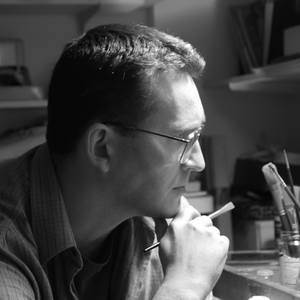 
FRAGMENT FROM THE NOTEBOOK (3)

"...Inspiration is a human face or a body, but subject matter is inconsequential, it could be anything. Initial stage of the painting or drawing is calculated, calm and simple, with a clear subject matter. Fragmentation and chaos follows, sometimes only to lead right back to the calculated and calm beginning which would be, inevitably, fragmented again. Different “poetics” are developing in the process, intentionally or unintentionally dependent to the painting process itself. Few hours of painting today could take any direction tomorrow, either to more fragmentation and complication or to clearing and simplification of the fragmentation painted yesterday. Extremes of opposites, symbiosis of sharp and soft, stillness and motion, bright and dark and a range of different temperature grays in between are originating and becoming visible. All those opposites can find the balance only in the process of painting and they cannot be devised, formulated or arranged in advance. In that process, separate rhythms, “plays” and fragmentations of the forms, lights, shadows and structures are developing and starting to evolve and deviate to different directions, somehow becoming independent from the initial “subject” matter.

It seems to me that there is never end to that process and in it I find the joy of painting that prevents me from declaring a painting “finished”. That is why my paintings are only in different stages, depending on where and when I decided to stop painting them. I am aware that rational decision must be made sooner or later: when to stop? But my paintings are never “finished"…"

Graduated at Belgrade University of Arts (Academy of Fine Arts, Painting Department).
Diploma (1988) awarded by the University of Arts, following a fife-year program in Fine Arts, with a major in Painting and Art history. Participated in over hundred juried group exhibitions in Europe and United States (mostly in New York City) and several independent exhibitions. Lives and works in New York City.

NOTE: HERE LIES THE WWW SURFER WHO WILL NEVER VISIT THIS PAGE. HE IS HERE FOREVER DEAD...

"...Endless, hideous hordes are pressing
Round us, in the moon’s dull light,
Demons whirling, flying, massing,
Like November leaves in flight.
Crowds of them! Where do they hurry?
Why so pitiful their song?
Goblin do they haste to bury?
Witch to wed they bring along?..."


"...Extreme ways are back again
Extreme places I didn't know
I broke everything new again
Everything that I'd owned
I threw it out the window
Came along
Extreme ways I know will part
The colors of my sea
Some perfect colored me
Extreme ways that help me
They help me out late at night
Extreme places I had gone
That never seen any light
Dirty basements
Dirty noise
Dirty places coming through
Extreme worlds alone
Did you ever like it then?

Extreme sounds that told me
They held me down every night
I didn't have much to say
I didn't give up the light
I closed my eyes and closed myself
And closed my world and never open up to anything
That could get me at all...
I had to close down everything
I had to close down my mind
Too many things could cut me
Too much can make me blind
I've seen so much in so many places
So many heartaches
So many faces
So many dirty things

You couldn't even believe..."

"...Soldiers! Heroes! The supreme command
has erased our regiment from its records...
Therefore, you no longer need to worry
about your lives, they no longer exist..."


"...Go tell the Spartans, stranger passing by,
that here, obedient to their laws, we lie..."


"...And the past is about to happen, and the future was long since settled. And the wings of the future darken the past..."


"...Maybe nothing in the world hears as much stupidities as a painting hanging in the museum..."


"...Nikon Sevast discarded his brushes forever and never painted another picture. Not even on an egg. He wept all the colors from his eyes into the monastery mortar and departed from St. Nicholas Monastery with his assistant, Teoctist, leaving behind him the print of a fifth hoof. Upon leaving he said: " I know a great lord in Constantinople whose pigtail is as thick as a horse's tail and who will employ us as scribes." And he mentioned his name..."

MILORAD PAVIC ("Dictionary Of The Khazars" )

"...The grand whorehouse which they have made of life requires no decoration; it is essential only that the drains function adequately. Beauty, that feline beauty which has us by the balls in America, is finished. To fathom the new reality it is first necessary to dismantle the drains, to lay open the gangrened ducts which compose the genito-urinary system that supplies the excreta of art. The odor of the day is permanganate and formaldehyde. The drains are clogged with strangled embryos..."

"...In art the mass of people no longer seeks consolation and exaltation, but those who are refined, rich, unoccupied, who are distillers of quintessence, seek what is new, strange, original, extravagant, scandalous. I myself, since Cubism and before, have satisfied these masters and critics with all the changing oddities which passed trough my head, and the less they understood me, the more they admired me. By amusing myself with all these games, with all these absurdities, puzzles, rebuses, arabesques, I became famous and that very quickly. And fame for a painter means sales, gains, fortune, riches. And today, as you know, I am celebrated, I am rich. But when I am alone with myself, I have not the courage to think of myself as an artist in the great and ancient sense of the term. Giotto, Titian, Rembrandt were great painters. I am only a public entertainer who has understood his times and exploited as best he could the imbecility, the vanity, the cupidity of his contemporaries. Mine is a bitter confession, more painful than it may appear, but it has the merit of being sincere..."
PABLO RUIZ
Delivered stillborn @ 23:15 hrs in the city of Malaga, October 25, 1881. He was christened Pablo Diego Jose Francisco de Paulo Juan Nepomuceno Maria de los Remedios Crispin Crispiano Santisima Trinidad Ruiz y Picasso.
Also known as:
PABLO PICASSO

“...You cannot imagine what sorrow and anger seize one's whole soul when a great idea, which one has long and piously revered, is picked up by some bunglers and dragged into the street, to more fools like themselves, and one suddenly meets it in the flea market, unrecognizable, dirty, askew, absurdly presented, without proportion, without harmony, a toy for stupid children...”

"... Hemingway wrote a short story using only six words and I am sure I could make a drawing using only one line. Or just one, small pencil dot in the middle of the white paper? But what would be the point? Why would I ever want to do that? I want a drawing with six hundred thousand lines..."


"...Napalm, son. Nothing else in the world smells like that. I love the smell of napalm in the morning... The smell, you know that gasoline smell, the whole hill smelled like . . . victory..."


"...Your shadow at morning striding behind you, Or your shadow at evening rising to meet you; I will show you fear in a handful of dust..."

"...Keep your face always toward the sunshine - and shadows will fall behind you..."

" ... I've seen things you people wouldn't believe... Attack ships on fire off the shoulder of Orion...
I watched c-beams glitter in the dark
near the Tannhäuser Gate...

All those moments will be lost in time,
like tears in rain...