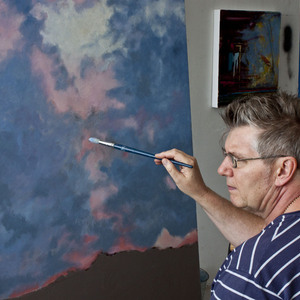 "Dego" (Detlef Gotzens)
Born in 1952 in Cologne Germany, Detlef showed from an early age on that he was inclined towards an artistic career in Life.
At the age of fifteen he became an apprentice in the stained glass studio of Jacob Melchior in Cologne where he completed his three year apprenticeship. During that time he was exposed to some of the best known artist in this field which only confirmed his desire to pursue art for the rest of his Life.
After working in the field for five years Detlef continued his education with a master's degree from the guild of Cologne and at the same time study glass technology and design for two full years at the famous Glass College in Rheinbach close to the former German Capital Bonn. He graduated with a Masters degree in 1977.
During all this time Detlef never stopped to paint and draw besides designing glass, after his graduation he participated in various group exhibitions' as well as solo shows between Cologne and Duesseldorf. He also spends a lot of time traveling throughout Europe absorbing art and architecture from the various cultures. In 1985 he decided to immigrate to Canada.
He and his wife settled in Montreal and immediately started to work for a local studio, but after just 5 month opened their own atelier. One of his first commissions was to restore a window at the St. Josephs Oratorio that was partially destroyed after a fire. In the following Years Detlef by then started to sign his original art work "Dego" and continuing to work on many high profile restoration projects from Montreal to Ottawa for example Christ Church Cathedral, St. James the Apostle, St. Patrick's Basilica in Montreal and the Peace tower windows at the Parliament Building in Ottawa, Notre Dame Cathedral, St. Patrick's Basilica and St. Anthony's Church, all located in Ottawa. At the same time he worked on numerous private and commercial art glass commissions in many different techniques that contributed to his reputation as a versatile and innovative artist. Many articles in various Papers and other publications have been written over the years and continue to date.
In 2004 he won an art competition to design 5 large windows for the Cultural Center in Huntingdon Quebec and these windows where published in the American Glass Art Magazine in 2007, and one of them with the Title "Imagine" was also exposed on John Lennon's and Yoko Ono' web site "Imagine Peace".
His expertise and technical skill was called upon again in 2007 when he created a glass faÃ§ade in New York City (Central Park) for one of the best known Architectural firms/designer Ali Tayar that was also published in the New York Times.
Currently Detlef is represented by the Galerie Elena Lee in Montreal.

1975 -1977, Master degree, Glassmaker Guild of Cologne, Germany
Became a Master of the Cologne Guild in October 1977

1970 - 1975 Five Years’ mandatory practice, after apprenticeship and prior to applying for Master’s Degrees, with the Firm of Paul Bong, Cologne, Germany, founded in 1901.

1967 -1970, 3 Year Apprenticeship at the Jacob Melchior Atelier (The oldest stained glass studio in Cologne founded in 1854) graduated as a Journeyman with certificate.

Here is the link to the finished Documentary Film by Alain Boisvert, an award-winning Quebec filmmaker https://vimeo.com/313377495. The film is about my journey to make this Painting based on the famous Peter Paul Rubens Painting from 1611 and my struggle to create a narrative that would meet all the criteria and be relevant to our times.