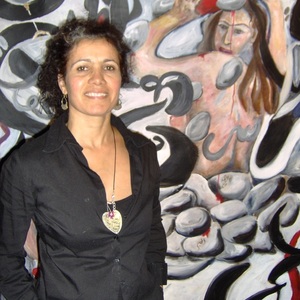 1961, Lorestan, Iran.
www.gosheh.se
info@gosheh.se
A Muslim women dreams and nightmaresHer paintings relate to stoning and hanging, her theme is the most extreme infringements of human rights perpetrated on women in Islam; and they show nightmares. For her not sex, but gender politics is the material of conflict in the complex sense, in the way female historians focusing on gender theory and social psychology critically illuminate crimes of violence against women on this earth, in the discussions of Islamic countries, in the Western world, including Europe. Her pictures are serious, not silly, and absolutely not hip.Quoted from: Gislind Nabakowski: Symbolism Begins with the Choice of Words. Thoughts about Hype, Emotion-Inspired Politics and Censorship. In: ,,n.paradoxa, Journeys, volume 17/2006, London, p. 93-94.
Her documentary film the integration of veil has been shown in the many film festival like Gothenburg film festival and accepted to Margaret Mead Film & video Festival, New York 2001.
Her artworks a Muslim woman dreams and nightmare was exhibited at Liljevalchs Konsthall (prestigious art gallery) Stockholm 2002.It got a lot of media attentions in and outside Sweden. Many Islamic organizations protested against the works. The attention imposed reactions and debate in the society. . There is a Documentary Film about Fateme Gosheh, Dance below white sheets, awarded with a prize by the Swedish Film Institute in2003.