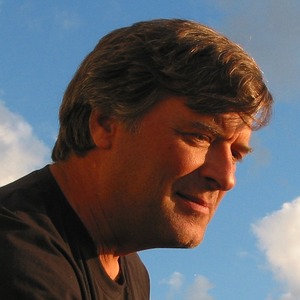 My education as an artist seems synonymously tied to the roads I have consumed on a motorcycle and behind the wheel of an 80,000 pound tractor trailer. Now I focus on the sensuality of forms, the gentle rise and fall of their sides and junctures. I mentally download shapes and spaces, and let my hands become extensions of my mind, much like I do when I am riding. Driven by curiosity, I seek out illusion in contour and graceful proportion, treating unusual intersections as purposeful composition. That intuitive force, fueled by the intellectual challenges of physical creation, drives me to create artwork that breathes its own life.

Born in Connecticut on February 2, 1960, Caron’s multidisciplinary training in the Navy provided a grasp of space, proportion and physics also deeply influenced by his perspective as a tractor trailer driver and motorcycle enthusiast. These experiences translate into sometimes improbable, often graceful and engaging sculptures of metal and resin that communicate through sound, texture, form and line.

Since Caron became a full-time artist in 2006, he has created more than 50 private and public commissions as well many other artworks as participated in shows throughout the United States. Among his installations are Giant Street Urchin at the $131 million Harbourside Place development in Jupiter, Florida; Wherever You Go, There You Are at Whitaker Center for Science and the Arts in Harrisburg, Pennsylvania; and Top Knot, commissioned by the city of Surprise, Arizona, for its Civic Center Plaza. His sculpture Hands On for the city of Avondale, Arizona won the 2009 Best of the West Award for Arts & Culture from Westmarc, a coalition of business, education and government leaders. Some of Caron's other public sculptures are in Tucson, Arizona; Chandler, Arizona; Avondale, Arizona; and Temple, Texas. Caron's sculptures have been exhibited at the Phoenix Art Museum, Shemer Art Center and Pima Community College East Campus and also can be seen at Pearson & Company in Scottsdale, Arizona; and Van Gogh’s Ear Gallery in Prescott, Arizona. In 2018, Kevin was named the 2018 Visual Artist of the year by Phoenix Mayor's Art Awards

In 2014, he began creating 3D-printed sculptures as large as 5-1/2 feet tall using several 3D printers including the 8-foot-tall Cerberus 3D Gigante (above), which he had built.

Caron's YouTube channel at www.youtube.com/kevincaron features more than 600 videos, which have been viewed more than 23 million times.