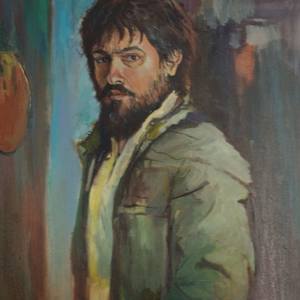 Giovanni Scifo is a realist figurative painter and illustrator, born in Agrigento in 1978.
He began his studies at the Faculty of Architecture in Palermo and in 1999 he won a scholarship and moved to New York where he graduated in Visual Arts at the “NYFA”.
From 2001 to 2007 he lives in Rome where he works at “Panorama Films” as a storyboard artist and concept artist in various mainstream film productions.
In 2007 he was appointed delegate in charge of "Cisl Arte" for the province of Agrigento.
In 2014, together with other artists, he founded the “Artificio” studio in Agrigento.
In 2015 he followed classical painting studies in Amsterdam and the prestigious Dutch art magazine "Palet" dedicated an article on his work.
In 2016 he perfected his knowledge in the field of classical pictorial disciplines and in the drawing of the figure and portrait at the "Russian Academy of Art" in Florence, studying with some of the most important drawing teachers of the Imperial "Repin" Academy in St. Petersburg. .
He has created several pictorial works for prestigious clients and institutional bodies, some of these: "The Seven Works of Mercy", for the Caritas Diocesana of Agrigento (inaugurated on the occasion of the 2015 Jubilee), and the painting "The Night of Sigonella" for Provincial Command of the Carabinieri of Agrigento at the "Biagio Pistone" Barracks (delivered in 2017, for the 203th anniversary of the Carabinieri Foundation).
His works are exhibited in private and public collections in various international galleries and museums including: “Galerie Oberkampf”, Paris (France); Civic Museum of Medgidia (Romania); Gallery of the "UMCK" Academy of Fine Arts in Lublin (Poland); “Galleria Vittoria”, Via Margutta (Rome); “Pax Cecilia Mythos”, New York (USA); “Roster Vilnius” (Lithuania).
Over the years, he has earned several awards and prizes.
He currently lives and works in Agrigento where he continues his activity and teaches drawing and painting at the “Studio Artificio”.

Faculty of Architecture, University of Palermo until 1998

In 2016 he represented Italy in an international art camp in Lublin, Poland. He realized two paintings for the gallery of the Ack UMCS Chatka Zaka.

In 2014, together with the painter Jianfranz Provenzano, he is given the commission by the Caritas of Agrigento to realize "The Seven Works of Mercy". Work, which consists of seven paintings on panels about 300x150cm each, is, in a contemporary way, the seven works of mercy through the work of operators and the Caritas volunteers. The works have been completed and inaugurated in 2015 at the Episcopal Palace on the occasion of the opening of the Jubilee.

Telamone 2011 Award "the colors of the peace"