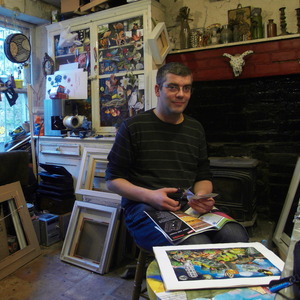 Gavin Lavelle graduated in Fine Art (Painting) from the National College of Art and Design in Dublin in 1991. His paintings have been in various group shows in Dublin, Belfast, London and the U.S, and his first two-person show took place at the Peppercanister Gallery in Dublin in 2012. In 2004 he was shortlisted for the Irish Emerging Artist of the Year, and in 2005 he was one of the "˜Four Irish Artists' show at Petley Fine Art in London. His mixed-media collages have recently been included in the juried Academy Exhibitions in Dublin, Northern Ireland, and Britain.