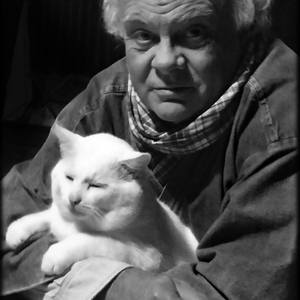 Gilles Le Corre, Born in Nantes, ( France) , on march, 1950 .
Soon after he was born, Gilles got away from his crazy family to become a sailor.
After discovering Chinese painting by chance on his voyages, he begins to paint seriously in the 1970s.
After many jobs he has lived by painting since 1987, with a studio first in Nantes, then Paris (from '86 to '90) and since then in Ceilhes et Rocozels, Occitanie, France.
He married Cat, his favourite model, in 1984, and to them a wonderful daughter was born in 1986.

Since 2007, he has been designing fonts, first for his own use, and since the beginning of 2008, for sale online.
As of the first production in 70's, the author always works on paper. Chinese paper,waste paper, paper treated in various ways : varnished, gilt, now fited with flax oil. Then, for painting and drawing, all is usable : oil-color, industrial polyvinyl medium and pigment, pencil, pastel, charcoal pencil, chalk, ink, watercolor and so on... most often used together.
On this present work, after oiling, the paper is ironed, then colored with polyvinyl, the work is then executed with pencil, white "carre-Conte", pastel, bloodstone, charcoal, sometimes polyvinyl over again. From 2004, march, watercolor over the back ground again.Usual size : 75 X 110 cm, on light and smooth paper (120 to 130 g.) No title, only serial number, no signature.
The author is currently using photographs, shot by himself in the studio with the collaboration of real models.