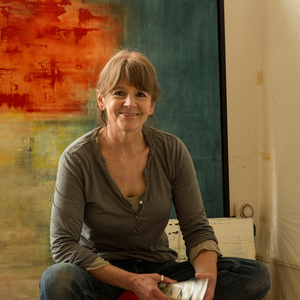 Each of Helen Acklam’s paintings are invested with an intensity of emotion. Sensations difficult to pin down - draw you into the borders, interiors and surfaces of her canvases. Consistently directed by her own biographical experiences, the paintings emerge and develop intuitively: things seep out.

Acklam is interested in describing things she is barely conscious of – vague instincts, feelings and sensations that hover somewhere on the border of consciousness, inaccessible to the world of language. The result is a curious sense of things being displaced, ensnared or hovering in between, with life and death never far from the surface.

At first glance, her paintings can appear to be entirely abstract. However, isolated figures and faces emerge as if peering through the layers of paint that coat its surface. Slashed, scratched and splashed marks begin to coalesce into fragments that threaten to slice and destroy the subjects within. For the artist, these paintings are vehicles to articulate what cannot and will not be spoken of: in search of a language to employ when words are not enough.