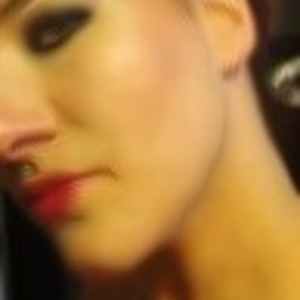 
Painting with collage has intrigued me from the very first steps of my artistic career. I try to make my passion about photography and theatre co-exists harmonically with my profound need to paint. The fact that I immortalize certain moments with my camera leads me consequently to the creation of paintings that consists of imaginary images which surround or frame these photos. These sometimes play the role of the main element in the paintings and at times the motivation of the beginning of a new idea.In general the themes which will attract and stimulate me in order to create a new piece of art are the ones that give me the inspiration to comment social or existence matters as well as to visualize my personal experiences that I keep taking from traveling. The artistic movement the final artworks are related to is usually a mix of surrealism, abstract expressionism, in combination with some futuristic and pop art elements._


Loretta Tsavaki, born in Athens-Greece in 1979. She studied Painting at the University of Fine Arts of Athens under the professors Valavanidis, Botsoglou and Papaspyrou.
In January 2002 she won the European scholarship: “Erasmus-Socrates” and attended for 3 months the courses of Painting and Printmaking at the Academy of Fine Arts of Florence in Italy under the Professors: Guarneri and Paolo Ciampini.
In the fifth year of her studies she wrote an essay with title:“Comparison between the Romantic movement and the Abstract Expressionism” and in the meanwhile she was giving art lessons at the private workshop of Art: “Anna Playianni” and at the “6th State High school of Nikea” in Athens as well.
In June 2004 she graduated winning the “Prize of the Excellent Graduates of the University of Fine Arts of Athens of the year 2004” given from the bank “Eurobank”.and took part in the group exhibition organized for the 6 wrangler graduates of 2004 in the “Museum Benaki” in Athens.
Some months later, in November 2004 she wins the European Scholarship: “Leonardo da Vinci” from the University of Patra. Thus, she returns to the Academy of Fine Arts of Florence for practicing as a tutor in Art Teaching. There, she was occupied for 6 months as professor’s U.Borella assistant attending and teaching the undergraduate students at the studio of painting.
In May 2005 she plays at “Teatro Verdi” of Florence, Italy, in the theatrical play “MEDEA”
In September 2005, Loretta Tsavaki has been chosen from the Council of Arts of Greece as representative Greek artist at the “2nd Beijing International Art Biennale” in China.
Straight after, in October 2005 she wins the scholarship “Micheli” from the University of Fine Arts of Athens and for one year she continues her post-graduate studies attending a Master Degree (MA) in Fine Arts at the University of East London (UEL)in London, under professors Grenville Davey , Karen Raney and Geoff Brunell.
During her post-graduate studies Loretta works further on photography and writes the essay: “Gilbert & George: A DEBATE ON THE “BLASPHEMOUS” INNOVATION AND CENSORSHIP IN ART”. In the same time she is practicing as a tutor in collaboration with the professors of Fine Arts in the BA of the UEL : Tim Allen and Fisal Abdualah as part of her Professional Practice Project.
In March 2006 she gives seminars at the Croydon College at the art students of the final year about the use and techniques of “collage” and writes the essay: “An Overview on Art Teaching by Practicing as a Art Tutor”.
In September 2006 she graduated holding a Master degree (ΜΑ) in Fine Arts.
In August 2008 she is invited by the 3rd International Art Biennale of Beijing (China) and at the International Art Exhibition “Olympic Fine Arts 2008”, to exhibit her artworks . The two exhibitions are organized by the Ministry of Culture of China.
In January 2009 she presents the “New International Exhibition of Contemporary Art: UNCONFINED”, in Athens, which is organized and curated by herself with the kind collaboration of the Municipality of Athens.

In June 2009, with her writing research on organizing an art exhibition with Sir Peter Blakes’ artworks at the Whitechapel Gallery of London, participates to the International Curatorial Competition of the British Council “The 5th Curator”.
In August 2013 Loretta Tsavaki will reppresent Greece in the second International Art Biennale of Art of New York.

Since 2005 Loretta Tsavaki has been working also on Acting – studies at the “Teatro San Martino” in Bologna,Italy (2008)and at the Acting Academy “The Theatre” in Forli –Italy (2009-oggi).
In May 2005 she played at the “Verdi Theater” of Florence, Italy, in the theatrical play “MEDEA” of Euripides and
in May 2010 at the Theatrical play: “Cyrano de Bergerac” of E.Rostand - director M.Bolcioni, (with the part of the the feminine protagonist) at the theater “Fabbri” in Forli(Italy).
In November 2010 she played at the theatrical played “Landscape” of Harold Pinter - director E.Monti - in Predappio Theater (Italy), as well(with the part of the feminine protagonist). At the same time she played at the cinematographic film :”Regalo a Sorpresa” –director Fabrizio Casini with protagonists Massimo Ceccherini and Paolo Gasparini.

Today she works as an painter at her art-studio in Faenza (Italy) and teaches Art History and Painting at the schools. Her artworks make part of private collections and collections of Banks, Museums, Foundations in Greece, Italy, China, Paris, London Argentina . She is also m

-Olympic Fine Arts 2008: Organized by the Chinese Mnistery of Culture