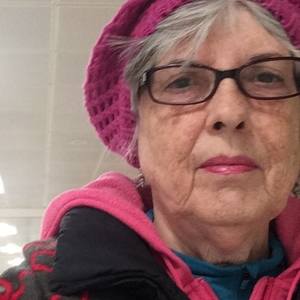 ‘For me painting is a key to understanding inner feelings, a way of releasing the experiences each of us holds inside, to transfer these feelings onto paper or canvas in order to share them.'
Incorporating watercolor, a fluid and spontaneous medium, into Taylor's mix of pigment, acrylic, pastel, and sumi ink achieves a more powerful communication. Taylor currently incorporates past work into collages, resulting in more powerful communications.

A native of California, Ms Taylor moved to Maryland more than 40 years ago when she began to paint seriously, first in watercolor and subsequently acrylic and mixed media. Active in the DC art scene as a member of Studio Gallery from 1991-1997, Maxine is now a resident of Baltimore, Maryland, where she was represented by Montage Gallery from 2003-2010. She has work in collections in California, Florida, New York and Maryland, including 18 works in the George Meany Center for Labor Studies formerly in Silver Spring MD.

Ms Taylor continues to exhibit regionally throughout Maryland. She was instrumental in the creation of Passageways Artist Studios in Riverdale MD and a participant in the formalization of the Artists' Gallery in Columbia MD before her move to her current studio in Baltimore. Maxine has created MAXgallery on her property and continues to participate and support Baltimore's Artscape Gallery Network as well as the annual BOPA Open Studio.

Although she continues to exhibit and paint, she is also becoming involved with organizing exhibit opportunities for both herself and others through MAXgallery. Additionally she has created Saturday's Child art class which involves sharing her knowledge and skills with children 6-12 years old along with their family members from the heart of Baltimore's inner city.