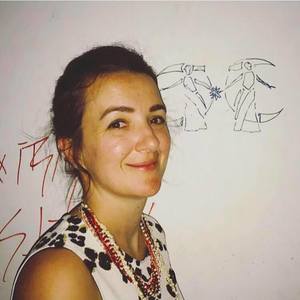 Oksana Prokopenko's works have been acquired into the permanent collections of museums in the USA (Museum of Russian Art) and Italy (Siena Art Institute), as well as hotel chains (Hilton, Loews Coronado, NYLO).
Prokopenko has been featured in Elle, Cosmopolitan, Bergdorf Goodman blog, the International Russian TV network NTV, radio shows, and more.
To quote Margo Grant, the Museum of Russian Art’s director, “The soul of Prokopenko’s work is in her walking that fine line between the transcendent and the ordinary. “ Oksana Prokopenko is a Ukrainian born artist now working in New York. Educated in the US at NYU and the Ukraine, she creates mixed media paintings as well as micro-mosaics from tiny pieces of glass.
"I am currently working on a series of highly textured mixed media works. Not quite sculptures yet not strictly paintings either, my work is after the truth within and just beyond the visible, reaching for the infinite yet expressing it in the finite ways."
Currently, Prokopenko’s work can be seen at St Paul the Apostle, 59th St and Columbus Ave, New York, and the Sheen Center, 18 Bleecker St, New York, NY.
Prokopenko's public art murals have been featured in Cosmopolitan, Elle, Gothamist and can be seen on Lower East Side (part of 100 Gates Project) and Barcelona, Spain.