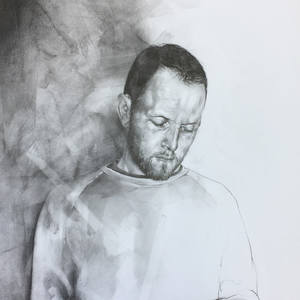 Patrick graduated in back in 1998 and was taught by the painter John Virtue and graduated alongside his friend and peer Antony Micallef. During the last few years, he has exhibited in a number of shows, selling work to a handful of well know collectors and exhibited alongside artists such as Antony Gormley, Antony Lister, Stanley Donwood, Vhils and FAILE. He has recently won the Galerie Heimat & NG Art Creative Residency Art Prize 2021, judged by Kate Bryan and Laura Gascoigne. While also appearing on Sky Arts, Portrait Artist of the Year in October 2020, he has also been shortlisted for the new art prize, The Sequested Prize, where winners will be revealed in March 2021.

My work deals with the idea of identity, from being fostered at the age of three I was constantly aware of my surroundings and the need to fit in growing up. Looking back, I recognise those feelings as universal and the work looks to explore the ‘human condition’, specifically what makes people do what they do to have a sense of belonging – from the everyday to the extreme.

From the schoolyard to being an adult, we constantly look to define ourselves by trying to fit into a group. Aspiring to be one of the ‘cool kids’, aligning yourself with a religious faith or football team, fashion, music, brands and celebrities: the sense of being in a tribe is all around us.

The work looks to showcase snapshot scenarios – a soft narrative to a given situation, process or ceremony. These scenarios could be, on the one hand, unsettling or odd, but to others comforting and familiar. Often the figure depicted is within a ceremony of sorts, a lot inspiration is taken from the Christian ceremony ‘Communion’ the idea of transformation, taking on something new, be that the belief of the ‘action’ being the body and blood of christ. I call this ‘active belonging’, the idea that people will participate physically and mentally in an action, a ceremony to show to themselves, to show to others that they believe, that there is meaning in the process, that they aren’t alone, they belong to something, giving a tangible meaning to their own life.

Artists & Illustrators : Shortlisted for Portrait Artist of the Year 2014

Portraits for NHS Heroes : Online group exhibition with the CBPP : Hosted by The Net Gallery : June 2020

Covenant : A Collection of Contemporary Drawings : A Virtual Exhibition : Curated by The Curators Salon : 9-30 April 2020