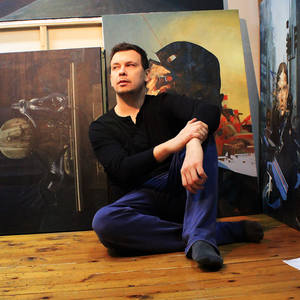 "I always thought that the condition of human emotions, especially as an expression, transcends time. In that context, the work of any man who explores this subject, tends to relay on same, or similar principles and elements. The degree of subjectivity in these matters does not rely so much on one's talent, as it does in sincerity of one's state of mind in the moment of exploration. Notes from Underground, written in 1864., Picasso's "La Vie" from 1903., or Bruegel's "The Blind Leading the Blind" painted in 1568., are all expressions of modern man and his struggle. In this respect, any contemporary art form, as a tool, is not so much a victory of progress, but more of a necessity in the realities of a given era.
Painting is the only visual art language that transcends time on the scale that encompasses human civilization in its entirety, and maintains the greatest level of visual communication. Painting, or art expression of any kind, in my opinion and experience, is a hard earned process. It is a never ending trial of climbs and falls. I was never able to relate to the romantic idea of relaxing hours of painting and enjoyment in a "free your mind with a smile" type of creativity. Whether I was doing video projects, paintings or any other form of expression, I always found my self in an almost tantalising state of mind. In that respect the time needed to create a single painting is almost impossible to predict. When the series is preconceived as a single minded installation, the time to put it together is notably shorter, and can be materialised in matter of few months. More classical way of contracting a series from individual paintings created in a given period of time, can take years".
Taken from the interview for the Berline based "KALTBLUT Magazine' anniversary issue, from January 2015.

2007. “The Presence of Jazz”. Working for years on musically inspired theme of jazz and its participants, culminated in first solo exhibition on the medieval fortress-islet of St.Stefan, on the Adriatic coast of Montenegro.
2009. Working on several projects in next few years, it fell on one of the politically inspired series, “Witnesses X,Y”, to be presented in a solo exhibition. Prominent Belgrade “Gallery of the Ilija M. Kolarac Foundation” (established in 1964.) organized the exhibition on October 9th.
Paintings from this series participated in many exhibitions and events, like 2011. solo exhibition in “Gallery Vladislav Marzik” in city of Kraljevo, or series of group shows like ULUS spring and autumn art salons.
Years 2010.-2012. Saw promotional exhibitions for series “Samples”. The “Samples” is a series of paintings created loosely between 2008. and 2011. They are inspired by human body and the relationship it has with the outside world. It is physical and violent, and begun without compassion, treating its subjects as an experiment.
Another series, that would be later known by their working title as “Intermediate paintings” started their life, almost simultaneously to the “Samples” series. Much more broad and loose in its subject, I.P. represented somewhat erratic moments in my approach to various interests. Although against every known rule of preparing well thought and (usually) single minded idea exhibition, I must admit that I quite enjoyed this loose and almost carefree approach. Nevertheless, all of those paintings still shared a connection of my existential approach to life and were summed up on many events and exhibition, with first solo exhibition of that type at “Exhibition salon “Shamliza” in Belgrade, 2015.