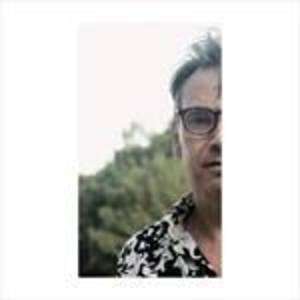 My first exhibition was sometime around 1983. Mostly portraits and landscapes and figure stuff. I hated it when I saw it up there, all together. Soon as the exhibition was done I threw everything in the dump.
I didn't draw again for a year or so. When I did start again I drew in such a small scale, always b/w, and somewhat surreal in style.
I sent 3 of the drawings to the Bluecoat Gallery in Liverpool for a show of Comic/Graphic Book Art and they liked them, asking for 3 more. I did six.
Soon after the show they were published in a number of comics and UK fanzines and I did more, ending up with around 80 in total.
I showed them to an agency in London and ended up working as a freelance illustrator for a couple of years...
( GQ Magazine, Observer Magazine, TSB, Orchard Books ), at the same time exhibiting where I could.
The 80 plus drawings would eventually become my first book, There's A Building On Sixth Avenue; quickly followed by Hello, This Is Your Penguin Speaking; and The Night The Moon Fell Asleep, all published by Hyperion/Disney, New York.
I also illustrated Paul Muldoon's, The Last Thesaurus for Faber & Faber.
I decided at this point I had pretty much gone as far as I could with my writing and increasingly my ideas were moving away from children's books and the constraints that come with them.
I wanted to concentrate more on my painting and drawing and at the same time I began making small sculptural works from vintage found objects.
All of which I continue to do.
Recent works were featured in Arizona State University's Superstition Review where I also wrote a number of guest blogs around my working practice.
More recent creations include HOMESiCK, a graphic novel for children and numerous related pieces and Gas Mask Girl, a series of drawings, paintings and sculptural works (inspired by my experiences during the recent Covid-19 lockdown).
I also wrote and illustrated a new children's book based on another character of mine; CARLOS, a spiky young cactus at home in Two Moons Valley, and again, the subject of many a painting/drawing.
I always try to include humour in my art. Some works may appear dark, and often are, but the humour is usually there to be found.
Thank you for reading.

Early exhibitions include No Laughing Matter at Tate, Liverpool, where I was filmed for television drawing directly onto the gallery walls, and State of the Nation, Herbert Art Gallery/Museum, Coventry, where my work is held in the gallery's permanent collection.
I have subsequently exhibited in the US, UK and Europe.
More recent shows include, The Four Temperaments at Beatnik, Sacramento, California (I was the only non US artist to show) and the international juried show,
'I Am' at Decumanus Gallery, Krk, Croatia.