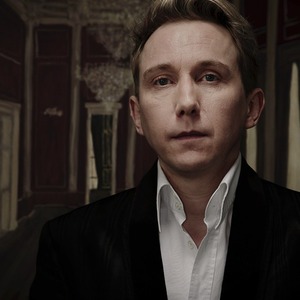 Rupert Dixon graduated from Cheltenham School of Art with an honours degree in 1993, since when he has lived and worked in London. His work is internationally collected and in a Royal collection. It is inspired by the internal architecture and spaces of palaces, villas, opera houses and other grand buildings.

Rupert seeks to evoke "The mood of the room removed from its utility" and using the scale and grandeur of his subjects he aims to evoke a sense of nostalgia for the splendours of the past. Combined with a strong element of the theatrical, evident admiration of the opulent idiom of the Venetian, Russian and Ottoman styles informs many of his paintings.

Taking images of interiors he likes, he rips them up and recombines them as mixed media works that then act as a cartoon for the oils. Rupert's locations are not specifically identified by their titles and they have an "˜almost ethereal, dreamlike beauty'.

He borrows freely in a grand tour genre where painting is overtly a canvas for his own imagination. He leads the viewer through echoing halls, corridors borrowing from other rooms, crumbling spaces and features juxtaposed, a decoration that is almost literary.

Rupert has sought inspiration from Lord Byron's "Childe Harold's Pilgrimage" and these works seem to echo his poetic passages:

"Palaces are crumbling... even dearer in their day of woe
Than when they were a boast, a marvel, and a show."