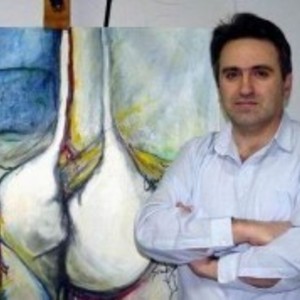 I was born in 1959 in Prosotsani, near Drama, and i leave in Kavala, a city of northern Greece.

The station of my work is my painting " did Rembrand knows Altamira ?" at 2002. Looking at this painting, someone could see the " "night patrol" of rembrand painted on a rock surface of a cave, someone else could see an abstract painting with many colors here and there that luckily resulted in that classic piece of art (as, according to the theory of chaos, a chimpanzee pressing randomly the keyboard of a typewriter has the possibility to write Shakespeare ) some other could see a detrited cave painting of Altamira, which when rembrand faced it with its mat colors, he painted his classical work.
I was puzzled for months why the "night patrol" was so perfect piece of artwork? It was not, of course, because Rembrand painted nicely 20 - 30 people. But because of the perfect lines, colors, excellent light, everything on it was wisely painted in a perfect way with the right quantities in the space.
The magic of it is not the expressions in the persons' faces neither the colored clothes. It is something behind all these. It is that cannot be said, the ineffability. The edge between the remembrance and oblivion, as that has been said.

have not studied in any school of art, because the painting is passion and this is not taught.
I do not consider myself self -taught but self educated. I assume that Caravaggio and Rembrand are my teachers.
I have studied forestry in the university.,