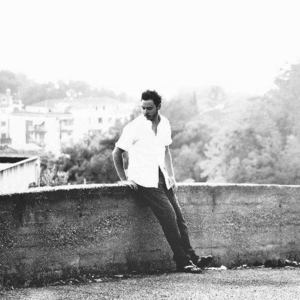 Salvatore Ferrara grows on the beautiful Amalfi Coast, whose landscapes inspired and approached him to the drawing as a child; he enrolled in the Filiberto Menna Art Institute in Salerno and then in Rome at the Academy of Fine Arts and at Rufa. In addition to being a painter, he works as a graphic designer and photographer.
According to his thought, artists are witnesses of their age, he loves conceptual art and thinks that a work should convey emotions and above all a message: this is what it seeks in its work. The basic message is often a denunciation, represents society, what happens, the direction we are going to. He wants to communicate his ideas directly, say something in a simple way and bring people closer to conceptual art. Using different styles but what it means is always: "Wake up people, look at what's happening!"
Our current society is increasingly running and people do not really think about what happens, distracted by TV, football, and false myths. It is in this scenario the artist has a duty to show people the truth.
He is a tireless researcher, wants to understand, seek, amaze, communicate: basically, play.

Often, he simply lets the color transmit and emotion, especially in his most intimate works, the legacy of the baby still inside of himself.

His interlocking designs, however, were born in the adolescence, "One day I took a very large sheet and began to draw everything that passed through my head, I saw stains become something. Then I realized that I was drawing what was happening to me Around today. My drawings are crazy stories of reality. " S.F.

In his photographs he is constantly searching for rhythm and time. His idea is that an image that returns these two concepts is always interesting.

In his artistic and cultural journey,he is influenced by artists, such as Banksy, Damien Hirst, Cattelan, Piero Golia, Marina Abramovic Burri, Manzoni, Kounellis and Fontana by their concepts, innovations and technique. Olafur Eliasson for his genius, Escher for entanglements, Prince for advertising's use, Rothko for color emotions, Haring for the joy, Basquiat for the style, Van Gogh and all the Impressionists, Michelangelo and Caravaggio among Classic, and many more.

As for the techniques, it mainly uses acrylics, marker, pastel and watercolor. The password to enter his or her idea lab is "Experimenting", in fact he is always looking for innovative techniques and close to conceptual art.

He enrolled in the Filiberto Menna Art Institute in Salerno and then in Rome at the Academy of Fine Arts and at Rufa. In addition to being a painter, he works as a graphic designer and photographer.