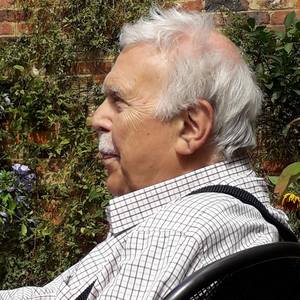 Theo Matoff was born in Vancouver, Canada. He moved to California to study architecture at USC before being drafted into the American army. He was released from the service in Paris, where he had weekly critiques of his artwork at the ateliers of André L'Hôte and Ossip Zadkine. Theo then attended the University of Florence, Italy, receiving a Doctorate in Architecture. After some years pursuing his career in the USA he came to Leeds in the UK, where he formed the Interdisciplinary Studies Unit combining art, architecture and surveying. He then headed Schools of Architecture in Plymouth and Leicester. He also continually painted and exhibited his art while practising architecture. Now retired, he is able to devote full attention to his painting. His studio is in Bushey Hertfordshire, where he currently lives.
Theo finds inspiration in scenes from his personal life and from the plethora of news images that we see daily. The paintings have now swallowed the subject matter and focus on content. Part of the content includes the emotions expressed in the medium and making of the painting - acrylics, charcoal and pastels. The subjects found in his personal life have become part of a pilgrimage. "In some paradoxical way," he says, "we understand the Universal through the personal."
Theo's artistic influences began with Van Gogh, Max Beckmann and Picasso and he has closely studied the work of Robert Motherwell, Jasper Johns and Richard Diebenkorn. His works are included in private collections in the USA, Germany and the UK. His exhibition "A Pilgrim's Progress" was at the Fairfax Gallery in Tunbridge Wells. He has also had one-man shows at the Montpellier Gallery in Knightsbridge, London, and the Doubtfire Gallery in Edinburgh, as well as participating in many group shows. Theo won first prize in the Art House Susan J. Brown competition with his painting "Mort in the Garden."

Many more examples of art and architectural work
may be found on www.matoff.com