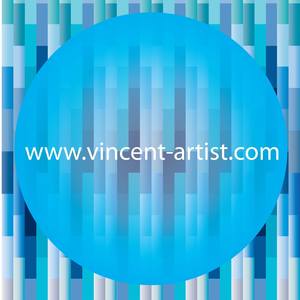 UK-based Vincent Artist is a Conceptual Artist and Post Pop Artist is best known for his abstract use of repetitive vertical, horizontal and diagonal lines superimposed with four-letter words forming a playable word search

“The idea or concept [Conceptual Art] is the most important aspect of the work, and I use any medium [painting, digital, printmaking or sculpture] to convey the idea to the piece of Fine Art”

The Artist is interested in the Duplicity of Life, the interaction between opposites, yin & yang, war & peace, love & hate, rich & poor, life & death. The Artist juxtaposes these contrasts with the innocent of Toys and Games used in our youth.

Vincent Artist's most recent body of work includes "Flags of the World" which communicates with viewers through linguistics, semiotics, and cryptography. The series includes English, French, Italian, Spanish, German, and American Flags superimposed with four-letter words of their respective language forming a playable word search from A to Z.

His previous works include, "Retro Celebrity Stars", which is a homage to celebrities of our past from the films of the Hollywood Golden Era, to the present day. Every one of these individuals helped create the world we live in today, and though we know of their names, their actual image might be fading from our memory.

"Disasters of War", which is a homage to Heroes and Villains from World War I & II, by the use of humorous and tongue-in-cheek language to explore the more serious issues of the past to the present day. Heroes and Villains are portrayed in life, death, and immortality by the use of toys of our innocent youth. The toys are used as a satirical look at the “Disasters of Wars” revealing shock and truths of war and violence in a playful way.

Digital Prints are available as Limited Edition Prints of typically 1 of 75, in the following sizes:

"The Water Between Us" is an Exhibition during Miami Art Week, Art Basel Miami 2018, in which Artist are to "reflect on the subject of water, one of our four basic elements...". For this Exhibition I have chosen to Exhibit two works that reflect on the theme of water, firstly, "War on Terror: Liberty's X Escape by Brooklyn Bridge" 2015 and secondly, "Retro Celebrity Stars: Heart of the Titanic, it's Raining Ice Sir!" 2015. Both works contains elements of water, firstly, the "East River" between, Manhattan and Brooklyn, New York, and secondly, the Atlantic Ocean separating, the United States and the United Kingdom.