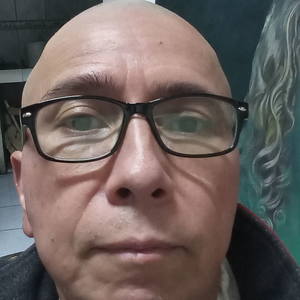 I was born in 1967, I graduated in visual arts in 2001 and in philosophy in 2008. Professor of visual arts from 2007 to 2013, I currently live and work in my studio in the city of Ejido, Mérida-Venezuela. Up to the present my works do not have an identity of their own, and I do not pose a specific issue or problem in them either, because I find it easy to develop enthusiastically with different media, techniques, and styles to broaden my ideas and motivate the creative process in total freedom, rather I like to generate different series of works that I experiment with painting, drawing, sculpture, portraiture, photography, copying, assembly, illustration and mixed media. In one of my series I use aluminum sheets as a support to draw on them by means of friction with corrosive tools generating luminous strokes, where the sensitivity of their atmospheres is altered to unbalance the forms between the use of elements that I collect and assemble to the support Polishing, such as hairs, sheep wool, printed papers, dryer plush, etc. In another of my pictorial series, I lead the viewer to a pure informalism from a method of creation that I have called "Symmetric Abstraction", where the effect of autonomous painting is the result of the techniques of embedding the canvas thus exerting bends, folds that alter the fluidity of the colors, in a kind of forms compared to those of the ink spots of the Rorschach test. There is a special series in which I apply as a copyist to reopen my interest in the study of the color and styles of the works of the great masters such as Picasso, Rembrandt, Degas, Cézanne, among others; and finally, this series gives me a greater technical and visual breadth for other projects using mixed techniques to rework new original works from illustrations, copies, photographs, assemblies, etc. My favorite artists are Leonardo Da Vinci, Cézanne, Picasso, Twombly, Gerhard Richter, and Rodney Graham, but the list extends much more.

2010-2015, Ph.d. (in progress). Faculty of Humanities and education, University of The Andes, Merida, Venezuela

2002-2004, Master's degree in philosophy. Faculty of Humanities and education, University of The Andes. Merida, Venezuela

1992-2002, Bachelor in Visual Arts. Faculty of art, University of The Andes. Merida, Venezuela

2007, Represented in the permanent collection of the Museum of Colonial Art, Merida Venezuela

2005, "Bolívar de Los Andes". Comision, the Pedestrian sculpture of the Liberator Simon Bolivar. Square of the Comptroller of the State Merida, Venezuela

2000, Comision, design, and execution of the "Monument to the Craftsman". DIGECEX-University of The Andes. Merida, Venezuela