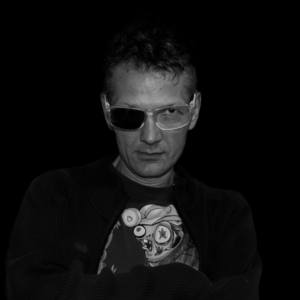 Christopher William Adach was born in 1970 in Lublin, Poland.
After his formal education between 1995 and 2007 he was mostly known as music events entrepreneur, embodying his artistic visions in his privet music clubs, but also, he was pioneering music art- projects in post-industrial abandoned spaces in his hometown in Lublin. Parallel to his career as music entrepreneur, he developed his reputation as self-proclaim interior designer for both individual and commercial clients. Some of his projects were published in local and national press focused on interior design.
Between 2003 and 2005 he made two trips to London, living there for almost 2 years participating in many London’s, mostly underground music events, in 2005 he returned to Poland for another two years and in 2007 finally moved to UK.
In year 2011 he was graduated with Interior Design & Decoration Diploma of Rhodec International School in London finishing at the same time Diploma of Higher Education in Interior Design at London Metropolitan University. At the same year he accomplished his second degree with Diploma of Professional Photography at the Photography Institute in London. His first major work as photographer was collaboration with the historian writer Christopher West in London for his historic book of ‘The Story Of St Katharine's’ published in 2014. Between 2013 and 2014 he was also collaborating with one of the leading celebrity photo agencies in London. His unique style was discovered by Wikipedia for which he contributed many of his photographs for almost 40 articles of international stars including Leonardo DiCaprio, Daniel Radcliffe, Ralph Fiennes, Hugh Jackman or Bill Murray.
In 2014 he decided to leave Europe and moved to Mexico.
Between May 2014 and February 2016 he was living in Merida, Yukatan during which time he was participating in several artistic projects such as ArtHo, Collective ‘Parque Hidalgo’ and Collective “Parque de la Maternidad’ , displaying his works on many local exhibitions.
In February 2016 he moved again, this time to colonial city of San Cristobal de Las Casas in rural, indigenous state of Chiapas, where he lives up to this day, collaborating with local art galleries and selling his art on local artisan market widely know and respected in all corners of Mexican Republic for selling local craft such us textiles, clothing, jewelry, etc.
In 2018 his work was noticed by national TV Azteca which recorder 30 minutes reportage about him, then shown on national TV Azteca channel.
His work is regularly present on many blogs, websites and services dedicated to tourism in Mexico, Latin America and abroad.