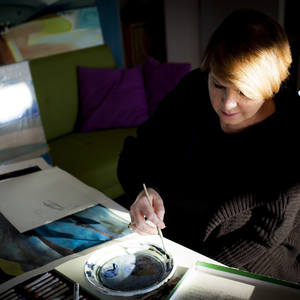 Cinzia was born in Milan in 1963. Years later, she fled to the countryside not far from the sea, to paint immersed in wonderful lanscapes. You can find the colors of the Italian landscapes in all her artwork, whether in her watercolors, pastels, or digital paintings.
Author and illustrator ,for tv animation series and books Her illustrations appear in advertising, magazines, book, newspapers and animation.She has worked with following publisher:Usborne, Evans,Loescher, Helbling ,Raffaello editore,Lineadaria, Capstone,Zanichelli,Usborne ,Pearson,Benchmark, Eli, Feltrinelli, Giunti, Mondadori,Zanichelli,Home Town world.
She was several times awarded by the Annual of Italian Illustration.
Nature and Art ,are the best inspirer of his naturalistic illustrated books .

After starting her career as an illustrator, she moved her interests to be aligned more with arts.

Cinzia specializes in paintings landscapes, the leitmotif is the journey.
She is attracted to places made of silence and shadows, even in the graphics of the landscape and cultures.
The lands are the lands of humans soul that we go through in our life.

"The landscape is a very old subject and used in various ways in the history of art, represents the distinctive appearance of a territory.
In the paintings of Battistel, there are no simple views, but the archetypal relationship between Man and Nature and then the Earth appears.
Here is represented the ancient, primordial work of the peasant and the artisan ,when he could still immerse his hands in the earth, in nature, working it with abundance and respect, aware and proud to reap the fruits of his work. Jung himself said that "work, in this technological age, leaves those who do it unsatisfied, while the possession of the earth has indeed a great psychological importance, that nothing else can replace".
The gaze and the sensitive soul of the artist is detected by his decisive but controlled brushstrokes, where nature is detected in its essence and purity, where each of us can discover that remote and ancient part of ourselves. The nature, the countryside, the landscape is represented by Battistel as a place to rediscover the ancient primitive relationship with the mother earth, rediscovering the meaning of life, where to exist, where to live in harmony, with respect, devotion and, finally, where to get lost. As a proverb of the Native Americans said, "the earth does not belong to man, it is the man who belongs to the earth.”Paola Gennari

Graduating in painting at the Academy of Fine Art at Milan

Cinzia’s artworks and watercolor paintings have been shown recently at many exhibitions.

other in 2017 Ri-traits :Marche landscapes in the paintings by Battistel -Senigallia,
Other in Ancona,Venezia, Belluno ,Torino ,Milano.
He exhibited at many gallery in Milan with the association illustrators, at the Atrium of Turin for "torino città olimpica", in Venice for Teatrio "Venice, yesterday today tomorrow ", and in many city where she lives in the exhibition" the other half of the book "artists of illustration ,and  Pesaro at  Gradari Palace for Confarte and for the province of Ancona in the itinerant collective Diseguali.
In the province of Milan at Valenti Court .in the group exhibition at Palazzo delle Stelline in Milan, "the metamorphosis of the traveler". Recently in the exhibition of the Spac circuit "Sentimento agreste" near Pesaro and Artarcevia, near Ancona.
In Fano in the Divers and Uguali review, awarded for the best comic book work, and in the "Passaggi festival" 2016 festival. He collaborates with Arca Foundation of Senigallia, proposing a journey of watercolors in the tradition of the Marches landscape, and creating books in symbols for children affected by autism, in collaboration with the Milan Polyclinic. Group exhibitions in Belluno for "Melimmagino" from 2014 to 2017.

she collaborates with Associazione illustratori, promoter of the Milan postcards exhibition, a group exhibition of works on City of Milan, exposed to the Lambrate space and Sblu space Milan, 2016 , 2017, and 2018 at City's Vittorio Emanuele Gallery .
2019 exhibition "the shape of Dea " Fano- Urbino
2020 collettive exhibition , the gods of the village
Applegallery Belluno italy
Paintings in permanent exhibition at Papier Gallery, Ancona Italy
She create a collection of wallpaper with her Art soon on istagram