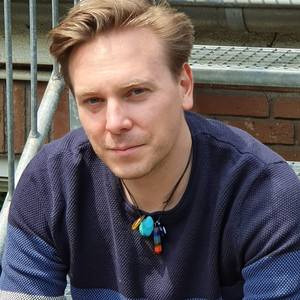 I was born in London and spent my youth in Francfort and then in Cologne. With a French mother and a German father, I speak these two languages fluently. After one year in Scotland at the Glenalmond College where focus on Fine Arts, I speak English quite well and knew by then that Art was my passion. But I had first to be sure, the life of an artist is not the easiest way.
After my “A Levels” or Abitur I looked for a certitude and try Geoscience and Mathematics before coming back to my true passion.
I then practiced drawing and aquarelle in Cologne and then followed a map preparation in Bonn by the Alanus Art university. After sending applications to three Universities in the Netherlands which came back all positive, I stopped Alanus and decided to study Fine Ars at the School of Arts “ HKU” in Utrecht. After 3 successful semesters, I came back to Cologne to follow my own path, the university was too restraining for my creativity.
Since then I live and work in Cologne. I began to expose in Europe and Asia in 2017/18.
I have different ways to begin with a painting.
The classical form is a project that I develop step by step, but which nevertheless transform itself on the long run. I can never really know how my painting will resemble at the end. I like to rephrase a thought from Picasso, If I knew from the beginning how my painting would look like, I would not even begin with.
Then comes the intuitive part. My paintings or Brainstorming/Muse-paintings reflect my emotions, dreams and events of the day. I begin with a white canvas upon which I draw lines and forms and even writes thoughts. These forms transform themselves under my eyes in faces, bodies, animals which give life to the painting. I then paint layers upon layers trying to keep the original pattern until I am satisfied with it. I then underline some important parts. My Muse-paintings are as different from one another as are my thoughts and mood at the moment