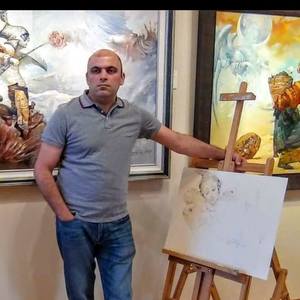 Tigran Hovoumyan was born on November 8, 1969 in Armenia.
''Painting extends to the surfaces, colors and shapes of all objects created by nature, and philosophy penetrates into these bodies, considering their own properties, but it does not satisfy the truth that the painter achieves, independently embracing the first truth of these bodies, as the eye is less mistaken than the mind.''-Leonardo da Vinci

His educational experience began in
1979 at the Yerevan Art School of H. Kojoyan. Tigran continued on as faculty of Painting (1985-1989)
P. Terlemezyan art college and faculty of Sculpture (1989-1995) at art-theatre Institute. He has several solo exhibitions and experiences that have taken him around the world.