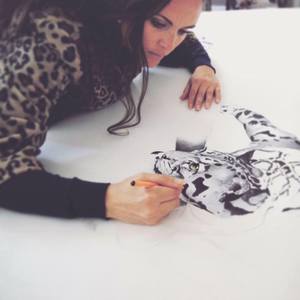 Within the drawn explorations of nature, Knight's concerns are upon the aesthetics of desire, sex and death. The works are provocative, playful, harsh and tongue in cheek. The compositions establish a series of graphic signs, aiming to evoke a narrative whether epic or fleeting.

The current developments juxtapose a darker underbelly, presenting unease; as well as the guardianship of something sacred. This response is loaded with a sense of otherness, something beyond the ordinary; a dystopian landscape. Knight currently works in biro as well as painting and sculpture. The use of biro on such a large scale is labour intensive; enabling very fine detail and presenting an etched like quality. Knight approaches drawing in much the same way as she paints, for this reason she considers herself to be primarily a painter.

Knight studied her BA Fine Art Painting at Chelsea College of Art and design 2005. She was selected as the runner up for the Marmite Prize for Painting 2010 as well as being selected for ‘Artist of the Day’ Flowers Central on Cork Street 2010 by professor Mo Throp. She is a regular participant at London's prestigous Art Car Boot Fair

2019
I recently completed a series of large scale drawings for SMC Design, London, the client is Saga. The artworks are to be installed in the summer of 2019 upon Saga’s luxury liner 'The Spirit of Discovery'. The works are based upon british native flora and fauna.