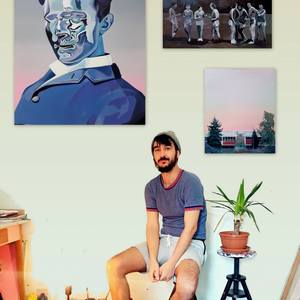 Mario Romoda was born 15.04.1987 in Vukovar . He grew up on the island Krk where he attended elementary school . School of Applied Arts, Textile and Design writes and ends in Osijek . In Zagreb in 2006 he decide direction in painting at the Academy of Fine Arts . He graduated in the class of Zoltan Novak 2012.
After his schooling, his work is embedded in various experimental solutions that lead to a problem of survival issues such as life polemics and painting itself. So far he has had 9 solo exhibitions and many recognized collections. He has been rewarded and recognized many times by critics and audiences.

He lives and works in Zagreb.

Name and type of organization providing education and training :