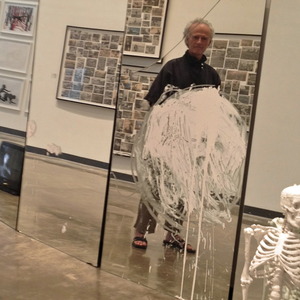 After practicing architecture for more than 25 years I have turned to a new medium. I now create art with paint on panels, mixed medium works & sculpture using found and donated objects and digital art. The images are uncommon, yet suggest the familiar forms of nature. Although the paintings are varied in color and composition, each image is part of a logical yet highly intuitive progression of work.

Each work begins as an adventure and its identity becomes as valid and important as the next, with the medium playing a most important role in the discovery of solutions. Originating in the subliminal, each work is a fresh encounter with the lush, unpredictable medium. The alchemy of powdered metal

My artistic vocabulary is devoid of obvious symbols and messages, I do not intend to tell a story or render a recognizable form. For me, the process of creating is a meditative exercise. Though the images are generated spontaneously, recurring themes of movement and form can be found. The paintings relate only to each other, each providing clues to interpret the next. This is their power. In contrast, my three dimensional works will at times possess a sense of content or a relationship to historical themes, though only in an abstract sense.

I work under various, self-imposed constraints, sometimes I limit my palette to black and white or to metallic pigments. This economy of means is not simply the principle of 'less is more', I relish restrictions as a challenge to more fully explore each image, to search for the maximum effect.

As I paint, I am preoccupied with the fluidity of the paint and the resulting density, and also the spacial concerns that are important in the creation of an illusion. I work with the reflective quality of the medium, creating many transparent layers which suggest great depths of space. I fashion complex layerings of many small areas of color in order to dissolve any central focus or subject matter.

The Catholic University of America