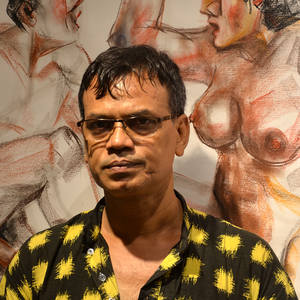 I am a professional Painter, very passionate about painting, I use a name for my paintings and write-ups as ALBERT ASHOK
Date of Birth: 7th February 1965
Education: Self - taught


Award and Honour : In 2008, ArtVenture, a philanthropic world organization in association with ARTICLE 19, based in London and Singapore launched the ‘Freedom to Create Prize’. This international prize is for artists who use their talents to promote human rights, including the freedom of expression, empathy, equality and understanding. Art venture had projected Albert Ashok as their featured artist in their global electronic mediums. It is a matter of honour and achievement, because, about 1000 artists from 89 countries had participated in that competition. I am also featured in Dusun, an International eMagazine featuriing the best in Asian region in their 12th issue.in 2013, from Malaysia
http://issuu.com/martinabradley/docs/dusun_12pdf Asian Arts and Culture e-magazine featuring only the very best in the Asian region.

Awarded and conferred 'Satya Shiva Sundar' , a highest honour by The district Council of Culture, Kalahandi, and Lalitkala Academy, Odisha, India, in 2010.
I had 45 group shows and 10 solo shows, in different parts of India.