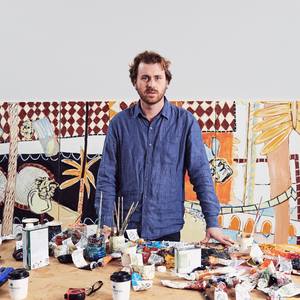 Alec is an artist who works internationally, having spent several years working and living in Delhi, India.

Now back in the UK, he is developing and processing the vibrant multi-sensory stimulus that he discovered whilst living in such a vivid place, as well considering other places he has spent lengths of time in throughout his life, such as California and Sri Lanka. This multi-sensory sense of movement within place translates into a ‘pan global’ vocabulary evident in his mixture of Western/Eastern influence in his painting style.

His practice, oil on canvas, is traditional in medium, although the images that jump in and around the canvas are vibrant and playful, exploring the concept of fleeting moments. Within his abstracted painting style there are shapes and forms that lead to suggestions of 'things'. This idea of semi-recognisable forms can suggest a narrative throughout the painting, these forms or shapes can appear through drawings, thoughts, ideas and lived or imagined experiences.

The paintings he creates may suggest spaces he knows, vibrant fabrics or places, or perhaps a moment glimpsed whilst laying poolside, or even a collection of observed objects, such as tyres stacked on the road or a table laden with drinks and paraphernalia.

Many of these elements are enhanced by a desire to explore the way light in space, either imagined or real, enhances the compositions he allows himself to glimpse.
This could be the bright harsh light that makes colours pop or a shimmering hazy light, recognisable from time spent in brighter sunnier parts of the world, California, India, Sri Lanka and Cyprus, The way it soaks its surroundings and makes the paintings vibrate, creating a resonation with this movement and moment, this creates an observation of the world through an imagined place, a playful space that translates into his own vocabulary on canvas

September 2019, The other Art fair, the barker hanger Los Angeles.

March 2019, The other Art Fair, the old Truman Brewery, London

October 2018, The Other Art Fair, Los Angeles, The Barker Hanger

March 2018, The Other Art Fair, Los Angeles, The Majestic Downtown

December 2013, 'To Wander, To Lust', The Gallery, at Norwich University of the Arts, Norwich, Norfolk, UK (SOLO)