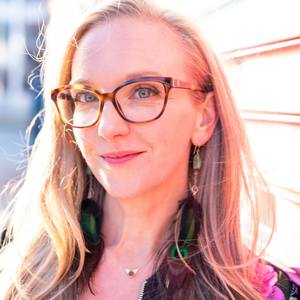 Born in Portland, Oregon in 1975, Alexandra Jamieson is a New York City-based watercolorist whose paintings have earned acclaim for their blend of natural, astronomical, and urban elements. Having worked in watercolor since 2009, Alex's work has been featured in the Mona Niko Gallery in Mission Viejo, CA, the Kunstraum Gallery in New York City, and was awarded a Merit Award in the Art Room Gallery Open Show 2020. She creates commissioned “meditation portraits” for private clients around the world and teaches painting and creative thinking in leadership workshops.

Alex is a third-generation artist, an award-winning and highly sought-after international speaker, an executive coach for women, best-selling author, podcast host of Her Rules Radio and was the co-creator and co-star of the Oscar-nominated documentary Super Size Me.

Her work as an author and documentarian has been featured in Oprah Magazine, Martha Stewart Living, Good Morning America, CNN, USA Today, and more.