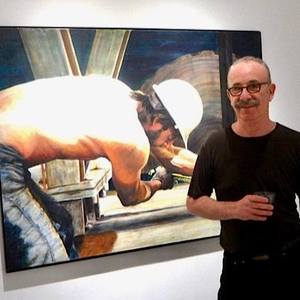 I attended Pratt Institute in 1962 and 1963, then transferred to Parsons School Of Design, studying interior design. Then studied at the Art Students League in 1964 and 1965, and then on and off for the next decade. My work is in the permeant collection of the Art Students League. And have shown at OK Harris and Jackendorf Bochi Gallery in SoHo NYC. Have also shown at General Electric Headquarters and Manhattan College. As an amusing factoid, I had six paintings on The Days of Our Lives soap opera over the course of several episodes that were meant to take place in an art gallery. More recently, I have shown at the Woodstock Art Association and Hunter Gallery. Several of my Oil Worker Paintings were bought by Precision Drilling in Houston, Texas. Recently, I had 16 paintings on display and loan at the Emerson Resort, an award-winning, Four-Diamond property here in the Hudson Valley. Also, I have shown at Carrie Haddad Gallery in Hudson New York. I was born in 1944 and grew up in the Forest Hills, Queens NYC. After college, I worked for several esteemed design firms then went into business for myself renovating brownstones on the Upper West Side and opened my own design firm Interior Analysis.