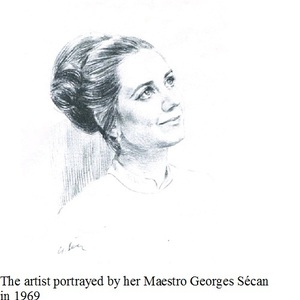 (from the site www.annamartinazzi.com)
Gifted with precocious artistic talent, at the early age of fifteen Anne Martinazzi enters the circle of the students of the French painter G. SÃ©can. During the years of university formation (resulting in a Language degree) she continues to cultivate the passion for painting frequenting the atelier of the Maestro and sharpening her technique. In the late 60s she begins to expose in Paris arousing the admiration and the encouragement of well-known critics.

In the following years, there will be other exposures in Paris, Beirut, Varese, Amsterdam, MÃ¼nchen, Milan, Ferrara etc. in which she presents works with a notable variety of subjects and of kinds (figurative, abstract, portraits,
sculptures), showing a remarkable stylistic skill, which met with the favour of merchants and collectors both in Italy and abroad.

Painting more for passion than for mercantilist interest, similarly to her Maestro, Anne Martinazzi has chosen to stay at the borders of the so-called "art market " in order to privilege a direct relationship with the collectors and to avoid any kind of compromise limiting her creative freedom or introducing ambiguous speculations on her work.

Some of her paintings are also on http://www.ncionline.com/wall-murals.php