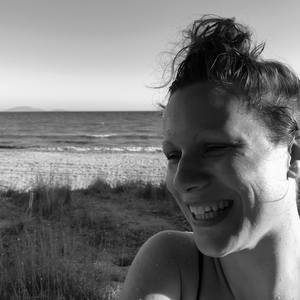 I am Anne (b. 1986, Germany), a gestural abstract expressionist painter who moved away from Berlin and lives on the German countryside now. My artworks are inspired by nature and organic forms. Every piece is named and dated by the day of its creation.

All material used is carefully chosen from the artist quality range of established brands, such as Hahnemühle, Lana, Canson, and Arches (papers), Sennelier (inks), Schmincke and Liquitex (acrylic paints), Faber-Castell (markers), making all artwork resistant to light and aging. I predominantly work with black India ink, acrylics and oil, but always like to experiment with new mediums.

Please note: There's a delicacy, depth and density in the paint layers of every piece, with a color intensity not possible to be captured in a photo. According to clients, the paintings look even better in reality than on the pictures. Contact email: info@anneborchardt.com

I have been selling internationally since 2012. My pieces can be found at private and corporate collectors throughout the world - primarily in the U.S., in most European countries, Canada, South Africa, Hong Kong, Thailand and Australia.

"Painting is a state of being. … Painting is self-discovery. Every good artist paints what he is." – Jackson Pollock

"There are no beautiful surfaces without a terrible depth." – Friedrich Nietzsche