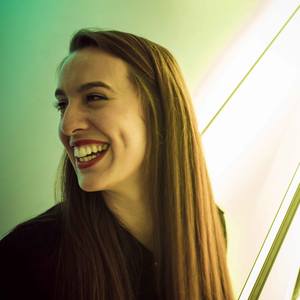 Aphra Shemza is a London based multimedia artist exploring the impact and legacy of technology on our world. Working with abstraction, interactivity and light, Shemza combines traditional sculpting techniques with the latest technology to create her work. Shemza’s work is multidisciplinary making reference to Modernism with a renewed optimism.

Shemza has created both public and private commissions: Seconds Pass for Save the Children, GlaxoSmithKline and Anagram this year, Post-Truth and Beauty commissioned by Morley College in 2017, and Heart Beats of Cristal for Champagne Louis Roederer, exhibited in the Shard, London in 2016.

She exhibits regularly with recent highlights including V&A Digital Futures, Winter Lights Festival and Xi’an Maker Faire in China with the British Council. She has also participated in public speaking events, notably at Tate Britain, the British Library and The Courtauld Institute.

In 2018 she launched www.art-ology.co.uk, a peer resource for artists who wish to be mindful of their environmental impact with the support of SPACE.

Her research about sustainability in the media arts has been published by the Electronic Visual Arts conference in London, and she now sits on their organising committee. She also contributed an article to Tate Etc magazine in 2016.

In 2016 she co-founded FLUX Events, a peer networking charity for artists working at the intersection of art, technology and science. Shemza co-curates the yearly programme of talks, exhibitions and events and oversees the day to day running of the charity.

Alongside her art practice, she has been the manager of the Estate of Anwar Jalal Shemza since 2012, championing the work of her grandfather and continuing his legacy, through exhibitions, publications and more.