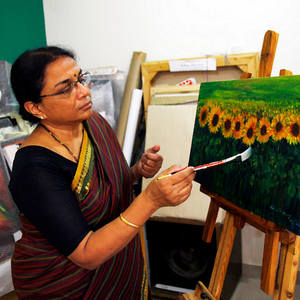 A self taught artist from India, art is a passion for me. Watching my father make small pen sketches on the Newspaper margins I too developed an interest in art, and like any other child, started drawing. This continued as a leisure activity. I started taking my art seriously since the last decade and a half. I love to experiment in all mediums and do not like to restrict myself a particular “style” or "subject" as I feel that restrains the spirit of art.

I paint whenever I can and anything that inspires me, gives me joy ! Nature and all creations in nature are the major sources of my inspiration.

If only I could, I would paint all through my waking hours what I dream of painting in my sleep! If there is rebirth I would like to be born an artist again and again!

I always remember the words of Charles H Cooley: "An Artist cannot fail, it is a success just to be one"

1. Jan 2019/2020/2021 Selected for participation in the “Chithra Santhe” an
annual art fair conducted by Karnataka Chithrakala
Parishath,Bangalore. I have been participating in this annual
event since the year 2007

Venue: Karnataka Chitrakala Parishath, Bangalore,India
A dance festival by Shambhavi School of Dance for all classical Indian Dance forms. Stalls allocated to artists on selection by juries. I will be displaying all my paintings on Indian Dancers for sale.

Venue: Karnataka Chitrakala Parishath, Bangalore
This Group Show was exclusively for the women artists and was held for 5 days.