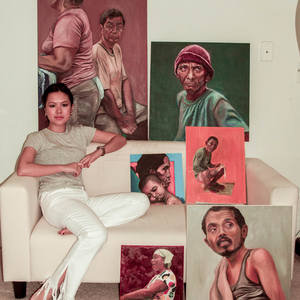 Bambina is a new Filipino artist having just begun painting full-time late 2016. She focuses on Filipino portraits using a classical oil painting technique called glazing combined with a style that is largely self-taught. Her fascination with painting people as she sees them has been developed since childhood as figurative works having always been her genre of choice. She is greatly influenced by the enduring works of Philippine national artists such as Bencab, Amorsolo, and Leandro Locsin. They have impacted her through her dream of one day contributing works that are also timeless and inspiring nationalism. Her paintings have been exhibited at Provenance Gallery in Manila and Kline Academy’s 10 Year Anniversary Open House in Los Angeles. Bambina was also a guest panelist at Manila Biennale 2018 where she gave a talk on her experience as being a Filipino artist living abroad. She is currently living in Los Angeles and studying classical painting at Kline Academy.