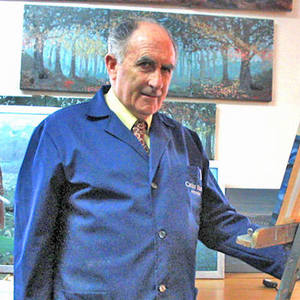 From an early age displayed a vocation and a capacity for painting but although he found himself studying Law, he nevertheless found time to study drawing and painting at the School of Arts and Crafts of San Salvador where he had as teachers such gifted painters as BORBOLLA and TAMAYO. After finishing Law and despite the promising prospects of a cosy life in the world of Banking, he decided

to travel to London where his works were exhibited at the Victoria Embankment and at the Leighton House Art Gallery. From there his artistic restlessness took him to France, Belgium, Holland, Germany, Austria, Italy, Greece and Egypt.

In 1962 he came back to Spain to have his first exhibition in the Ateneo Jovellanos, Gijn. Daniel Arbes wrote of the young Roces: 'to travel from Gijn to the Valley of the Egyptian Kings in search of inspiration is certainly something out of the ordinary.' He returned to England an exhibit at the West Malvern Vicarage. He designs and executes the set for 'El Burlador de Sevilla' performed at Cumberland Hall. In the meantime, while preparing a doctorate in Maritime Law he does a Master in Arts at University College London.

The biography of Carlos Roces, written by D. Patricio Adriz, figures in the 'Gran Enciclopedia Asturiana' and in the 'Diccionario de pintores españoles del siglo XX.' His work hangs in museums and private collections in the Argentine, Ceylon, Colombia, Egypt, U.S.A., England, Mexico, Paquistan, Venezuela, etc., as well, of course, in Spain.

In 1978, LINARES-RIVAS wrote these lines in a Leon newspaper. 'Since 1948, when very young, to the present day, Carlos Roces has had an intense curriculum vitae, so many steps on the path of progress that it is difficult to pause for a moment: collective exhibitions, individual exhibitions, awards, prizes, academic titles, in short, many milestone in a still short lifetime.'