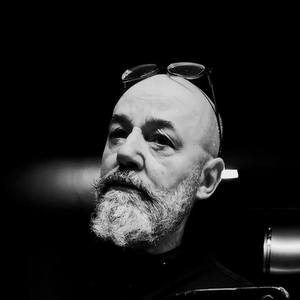 Cesare Iezzi was born in Chieti, Italy on March 12, 1958. Self-taught, he have began to paint at a very young age, among the marble sculptures and sketches of the paternal laboratory. The artistic debut takes place at the Bottega d'Arte in Chieti in 1976. He looks with interest at both the metaphysical painting of Giorgio de Chirico and the surrealist painting of Salvador Dalì and Renè Magritte.

After graduating from the Technical Institute for Surveyors in 1981, he enrolled in the faculty of architecture and in the same period he made a series of drawings inspired by Frank LIoyd Wright.

In 2007 he produced the series of works called "Superstringhe" inspired by the book The Elegant Universe by Brian Greene. In 2010 he moved to Macerata. In 2015 he presented his latest research at the Aurum in Pescara entitled "Photopsyche", a series of digital art photographic portraits on the theme of the visible and invisible. Since 2016 he has transposed the concept of Photopsyche into sculpture thus creating "Sculptures" or the transfigured vision of the human being in which the materialized forms created by his own psyche appear, presented during the Artedmark Prize in Macerata at Laboratory 41 in 2018. In the same year inserts the two researches "sculpture and digitalart" in three installations which he presents in Milan at the Made4art Gallery.

In 1981 he set up his first solo show in the Malatestiana gallery in Rimini.
In 1984 he was invited to exhibit at the Galerie Sallambò in Paris, with the stage name Audens.
From 1990 he began with a long series of exhibitions to attend the Tuscan artistic environment. In 1996 he was among the founders of the Hyperspace Movement and signed the drafting of the Hyperspace Manifesto by participating in all the exhibitions of the movement in Italy and abroad.
In Tirolo di Merano, on the occasion of the event "The Tree of Poetry - Homage to Ezra Pound", he is present with the Hyperspace Movement at Brunnenburg Castle at an exhibition curated by Mary de Rachewiltz, Milena Milani and Giancarlo Da Lio. The works of the Movement become part of the "Pound" collection, (1998).
During the Photofestival event entitled Elements. In 2018 he was among the selected of the Marche Award in the sculpture section.