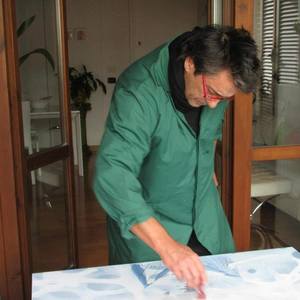 
He lives and works in Pescara, Hamburg and Rome
Painter, director and producer.

1972-75
Years of nomadism between Ovada's community and European roads ; artistic main reference "Convergenze Gallery", a versatile space directed by Peppino D'Emilio, PESCARA. He exhibits abstract/informale art in several group-exhibitions then he drops painting to dedicate himself to music, theatre and cultural planning. He gets back to painting many years later finding a new direction, figurative/conceptual art.

1984
Planner and director of " Officina club" in PESCARA, one of the first spaces for multimedia-conception in Italy.

1987 - 94
Collaboration with theatrical research group "Florian". During those years he develops a collective experience that gives life to "Gruppo d'intervento artistico", later called " Brigata Abruzzi" with Giulia Basel, GianMarco Montesano, Giovanni Mostarda, Enzo Berardi and with the contribuiton of new French philosophers Baudrillard, Sollers... It's a moment of decision in which he collects all the experiences of former nomadism and turns it into visual-art.

1998 -2011
Establishes his own studio : "the Ice Badile-studio" in Rome, an open-space shared with artists: Ivan Barlafante, Emilio Leofreddi, Claire Longo, Daniela Papadia and Andrea Orsini to whom we must add several other young artists and musicians joining the studio for apprenticeship.

He defines John Fante together with Janis Joplin, Rossellini, Modigliani, Piero Ciampi, Jesus and P.J. Harvej, figures belonging to his own poetic imagination by full right.