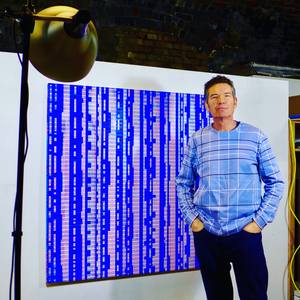 I studied at Camberwell School of Art London, at that time largely known for producing figurative painterly artists. However, I was influenced by abstract painters, and moved away from the figure. My art developed into large-scale painterly figurative based abstract painting, using oil on canvas, always more tonal than colourist.

Having always lived in London, the energy of a big city has soaked into my being and I began to move away from observational painting to using images from my experience and imagination rather than what was immediately in my field of vision.

I spent several years living and working in Barcelona, here my work began to take another direction, it was not a conscious decision, it just happened. In recent years I moved away from using oils to acrylics and began experimenting with a variety of paints, mostly interference and fluorescent, along with pens and sprays and creating my own stencils, the results pushed me further into another direction.

I had never considered myself a colourist, but as time has passed I have become increasingly more interested in colour and how pigments react with each other. Sometimes choosing to use pure colour from the tube, at other times mixing. The new materials allow me to combine complicated layers with intricate pen details or stencil work. Ultimately, they are not decorative, despite having elements of repeat pattern and motifs, the imagery is intended to offer an alternative reality, not identifiable but always present, lurking under the surface.

The city stimulates me in every way, its many layers and complexities which come into play in my imagery. The visual overload. I am interested in finding ways of translating this energy and chaos into a painting, which whilst being one flat surface, can also provide depth and dimension and optical excitement.

My art is executed by hand, by brush, by pouring or dragging paint, mark making, yet can appear digitally enhanced or manipulated. Technology is an influence because in contemporary life we are increasingly surrounded by it and reliant up on it. However, by choosing to use traditional mediums, such as paint on canvas, I am also reacting against technology to produce something unique, hand made and coming from within me.

I work in series, each one feeding off each other. I have a wide range of interests that often require a different technique, forcing me to adapt and experiment.

My work is collected in New York, Toronto, Singapore and Europe, both in private and corporate collections.

Watch A Video About Colin McCallum