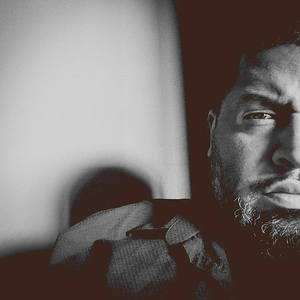 My work is under the direct influence of my 20+ year career as a graphic designer. I'm either decorating with landscapes or speaking on cultural issues with human figures and faces. I want to show you something familiar and then alter your perspective. This isn't to be dismissive of your opinion but to enhance how you might perceive the subject matter.

PEOPLE: The figures and faces are an amalgam of people in my life… they are every person... they are me. And anyone who has struggled to find a place and solidify their meaning in this world. Our stories may not be on a global stage but the collective need for understanding and relevance makes each debate, fight or race a grand event.

Each piece begins simply. I then apply layer upon layer of information. Not to obscure but to mimic what my brain often does, constantly adding data and context to a setting or subject matter. I suspect we all bring our own “layers” to the events and visuals we encounter and that's where the good stories are. That's where our own vision governs our relationship with the art.

LANDSCAPES: These shapes and "views" are familiar but I want to you conjure up images and places you have personally experienced. Not simply reproduce a scene for its own sake. And honestly, beyond that, I want you to enjoy what you're looking at. I can't help but share what's in my head.

October 2020 | Select as Poster Artist for the Texas Book Festival

January 2019 | Austin, Texas | Dougherty Arts Center
Despite It All: A solo show of the artwork of Dave McClinton.