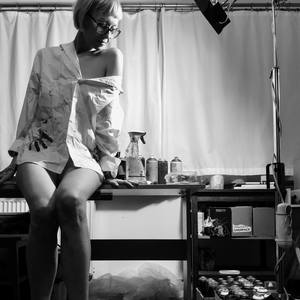 Mathilda Coeur is the pseudonym of a Polish artist who creates mainly contemporary art, abstraction, minimalism and installations on canvases and more.
Her adventure with art began exactly on January 18, 2018 and was born out of a great love for a man, also an artist, who also turned out to be a tyrant, who manipulated, humiliated, blackmailed, tested, punished and brutally abused her mentally and emotionally for over a year and a half in order to take control of her and her life completely.
Behind every canvas created by the artist there is a story and this is the essence of her work and leaves a part of her soul in every work forever. Each canvas has been created with a whole range of emotions. Every canvas is the victim's scream. The victim, who was repeatedly brought to her knees, in incredible pain and suffering, often "beaten" and defeated, but who decided to face the final battle. She fought for herself and won. She won her life. Free from terror, tears, fear. She came out of the darkness and was born again as a fully aware artist who above anything else wants to show the world whole truth about herself.
Mathilda is also a person with ADHD disorders that make her brain hungry and creative. Therefore, her works are highly diverse, and her development is progressing at an alarming pace, which often causes surprise both in the artistic community and among people completely unrelated to art. Especially since she has never had any grounding in art before.
The artist doesnot stick to one style or canon. Thanks to her disorders, she also has a lot of courage to try new things, experiment with different media, and this finally gives her wide possibilities to express herself, her sensitivity and her emotionality.
She started as Madame Butterfly Art (instagram @madame_butterfly_art). This is her first project and the first steps she took as an artist. The idea and creation was given to her by her ex-partner, who introduced her to the street art and graffiti environment from which he himself came and which he developed for over 20 years. Thanks to that she got to know the world of art and street artists from Europe and beyond. It was also a time when she started to experiment and seek her artistic path. She left her mark on the streets of some European cities, mainly Amsterdam (NL) and her hometown of Poznań (PL).
Then she created a series of works that can be classified as the canon of critical art. She brought to life dark characters speaking to the audience using slogans that were supposed to make us reflect on ourselves, life and the world around us. The artist's ex-partner joined the project and the duo John and Jane Doe (Instagram @john_n_jane_doe) was formed. The works of both of them are very different from each other and it is quite clear who was the author of each of the paintings. Due to her parting with her partner and the accompanying negative emotions, the project is currently suspended. Nevertheless, the artist leaves this door open and it is possible that in the future she will continue to work on the project, but then only as Jane Doe.
At the end of 2018 she decided that it was time to try her hand at abstraction. On January 1, 2019, the Diary of Mathilda (Instagram: @diary_of_mathilda), a project that is a kind of diary documenting her path as an artist of contemporary art, was created. This direction gives her an infinite number of opportunities and challenges. It allows her to develop and experience new things every day. Especially now that she has regained her freedom and independence.
Despite all the bad things that have touched her personally and marked her for life, despite all the scars that will remain in her forever, the artist does not regret even for a moment anything that happened to her.
She has learned how strong a person she is and has found a true love with which she will remain "until death do us part" - art.

Her life is her art.

No artistic preparation at any art school.