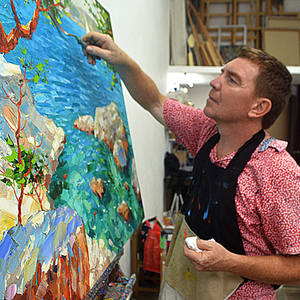 Creates bright and inspiring paintings in different genres. All paintings are created with a palette knife, oil and acrylic paint. Raised in Sunny Asia, absorbing a bright palette of colors, the classical school of painting and modern trends of impressionism are a reflection and a bridge in his work forming new forms of synthetic art.
"From the beginning to the end, the whole process of creating paintings takes place in my Studio. Manufacturer of stretchers of different sizes, stretch canvas on stretcher frames I also do personally. The themes of my themes are observations in everyday life, as well as inspiration in travel".

Permanent exhibition of large-format paintings in the gallery "Artdistrict", Amsterdam, the Netherlands.

2 years exhibition of paintings at the "Sedona gallery". Arizona.

1995- personal exhibition at the Art Academy

1998 – collaborative exhibition “Celebration of NAVRUZ at the Central House of the Artists, Tashkent .

2002 – May – personal exhibition at the art gallery Meridien, Samara, Russia

2007 - December - "ТЭЦ - территория искусства", an exposition of the project by Volzhsky TGK , Russia.

2009 – August – a creative workshop and exposition at the city of Baden Baden, Germany and Stasburg, France

2010 - November – participation in the Rusian-Brittish "Charterhouse Charity Art Auction", London, England.. All the proceeds from the auction were donated to The Humanitarian Aid Relief Trust" (HART).

2011 г. - May- Participation in the Russian-Brittish charity art auction “Joy”, Samara, Ruussia. .. All the proceeds from the auction were donated to build and upgrade orphanages in the Samara region of Russia,

Since 2014 cooperation and permanent exhibition of paintings in the gallery "Art district" - Amsterdam. Holland.

Since 2017 he has been cooperating with the famous French gallery.