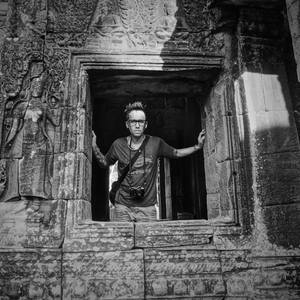 Edwin Datoc is a fine art photographer and filmmaker who is renowned for his striking cinematic imagery and portraiture, whose images capture an often surprising and spontaneous energy in even the most reserved and difficult subjects of fashion and culture. Born in the Philippines and raised in Australia from the age of eleven, his calling for photography didn't come until in his late twenties during his frustration working as an accountant. "It was a complicated transition to becoming a photographer, knowing you are giving up the financial stability. But I realise that life is a not dress rehearsal and to pursue what you are passionate about." Edwin’s creative projects has since taken him to more than eighty countries. His appreciation and familiarity with diverse cultures reflects a unique international perspective to his work. His influences and inspiration are varied from travel, design, architecture, music, art, cinema and literature.
His command of narrative working in stark locations has led to editorial assignments for Harper’s Bazaar, Elle, Marie Clare, Cosmopolitan, Esquire, and Tatler. He has photographed advertising campaigns for Costume National, Esprit, L’Oreal, and has created striking films for Landmark HK, G2000, Kim Robinson Cosmetics, Agent Provocateur and Fiorucci.
He is active in the fields of both fine arts and assignment work.
Edwin currently lives between New York, Hong Kong and Sydney.

Watch A Video About Edwin Datoc