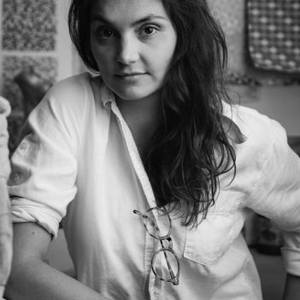 Elodie Boucher is a self-taught French artist. Her mixed-media sculptures explore the relationship between Man and Man-made creations, the perception of beauty and its different representations.

She juxtaposes classical sculpture - with quasi-medical details of body structures and appearance that express her fascination for live and colorful organic matter - and black-and-white, cartesian, often-geometrical elements embodying Man's ability to create, formalize thoughts and develop concepts. Bright streams of white light connect both, representing Man's constant desire to create the extraordinary so as to get closer to the end of the tunnel.

This reflexion on Man and his capacity of development and creation, and the resulting mirroring effect between what Is and what Exists, are omnipresent in Elodie's most recent series titled "L'Etre et le Néon" ("Being and Neon"), in reference to the philosophical essay from Jean-Paul Sartre, "L'Etre et le Néant" ("Being and Nothingness").