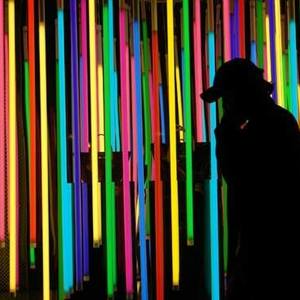 Jorge Algraves was born in Chihuahua Mexico in a small town next to the U.S. border, then moved to Mexico City, and currently lives in Los Angeles, CA. Different art trends such as painting, sculpture and photography attracted him since his youth. He was always fascinated by the images, colors and movement trying to capture the world that surrounds him in the way as he sees it.

Jorge became a graphic designer and earned a Master’s degree in Visual Arts, but he still wanted to pursue his passion of being an artist. His themes focus on society and his perception of society. His work is based on the neo-expressionism tendency to maintain a focus on social analysis, the simple life and what it represents in each person. His paintings reflect a unique collaboration between the artist and the life that surrounds him.

In addition, Jorge’s accomplishments included being published in the Los Angeles Voyage magazine (2018), displaying his artwork at the Dia de los Muertos Exhibition in McAllen, TX in 2016, and being a nominee in the Communication and Arts Awards 2018 for Integrated Campaign for Public Services. His current series, "Spirit in the Sky", is dedicated to people with cancer, where he intends to donate 60% of his profits to support research of development of treatments and cures.