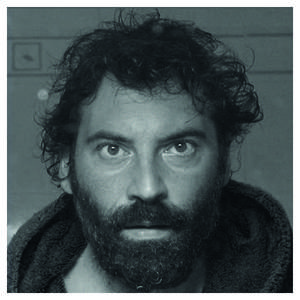 Born in 1976, Gianluca Cavallo lives and works in Salerno.
Since he was a child, he has been drawing any kind of subject with extreme naturalness. His portraits, comic-strips, drawings and sketches visualize reality and imagery within the frameworkof daily life.
In 2006 he projected the inside of the Church of Virgin Mother in Sassano (Sa) and decorated entirely both the altar and walls with oil paintings based on scenes taken from the Book of Genesis( "The original sin" and "The expulsion from Heaven" frame the huge central altar-piece devoted to the Virgin Mother).
In 2007 he met the artist Ugo Marano(1943-2011) that later, in January 2008, introduced his first solo exhibition at Palazzo Sant'Agostino in Salerno. He outlined that "Gianluca Cavallo shows us paintings of different sizes and this is quite important since the choice of pictorial space, small, medium, large, giant, its horizontality or marked verticality is already a deserving stimulus of research to find out unusual pictorial inspirations. Besides we catch his interest in painting in different ways and techniques. Different themes are faced as well. As in every work he was about to plunge into a small gully. The artist works without any prefixed models, subjects or objects prepared in the studio. He creates by heart and even this methodology projects him into an area of oblique contemporaneousness."
Since 2008 he has had numerous important group and solo exhibitions with both famous or emerging painters.
Recently his production has been enriching of conceptual moments and has been opening up to multimedia languages.
In 2013 he has partecipated at 55^ Biennal of Art of Venice with a great work, named "Teatro del bailo" in National Pavillon of Republic of Bangladesh.
At the moment he has been working mainly in Rome with many galleries,
experimenting and carrying on his personal research .

In 2002 diploma of painter-decorator at "Palazzo Spinelli" in Florence