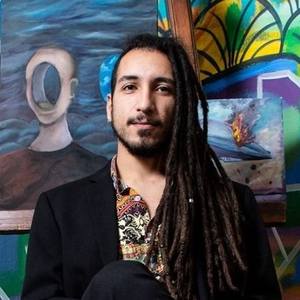 Luigi Cona is an Italian artist and painter.
He was born in Giussano, December 30th 1992.
He began drawing at the age of two years, revealing early a strong artistic and creative talent.
he follows the path of freehand drawing, inventing landscapes and themed characters, influenced by comics and animations.

The parents, after the first level secondary school, decided to enroll him in a school for accounting, in that period he continued with the comic strip and caricatures, until the professors, seeing his indifference in the other subjects, commissioned the portraits while they they explained.

At the age of 15, he discovered digital graphics where he was immediately familiar with software such as photoshop and various of the adobe package.
composes drawings with graphics and creates photomontages for friends, ignoring the comic, experimenting with illustrations and drawings with watercolor.
on the day of his birthday he was given a tripod and some tempera bringing him to enter the world of painting.

Thanks to the painting expresses his ideas and his emotion, he leaves the school painting his first works full time.
decides to use only his imagination by studying the composition of shapes and lights through the use of tempera and charcoal.
he is considered a whimsical painter for critics and other artists given his continuous change in painting techniques.
on March 13, 2014, through the saatchi art web showcase, he sold his first opera in new york.

In this period Luigi made many tables and drawings following metaphysical and surrealist painting.
exhibits in the street and in the artistic events organized by the municipality and associations.
exhibits in Venice in 2015 at the "bazart" exhibition selling paintings abroad.
still he makes oil paintings and drawings on paper, focusing on the whole of shapes and light.

recently he collaborates with the Milan's collective "unreal palace" that writes about him:
"Luigi cona pushes itself into artistic and human research through a sincere, welcoming painting that reveals beauty in the simplicity of objects and common situations. his images, as if they were a biblical comic, narrate of relatā and unreality. luigi breaks the light into fragments and reflections of black ballpoint, wrapping the sheets in labyrinthine swirls ... careful to fall into it.